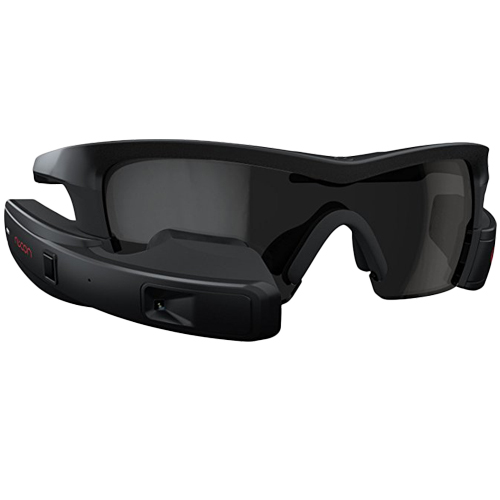 You may be surprised to know that Recon Instruments was the first to develop a headset display back in 2010. Though the Jet is often compared to Google Glass, Recon was experimenting with this technology over a year earlier. If you do compare the two products, you’ll find that Recon is all about designing for athletes.

The Recon Jet Smart Eyewear is a revolutionary headset display that looks nothing short of something you’d expect in a video game. It was made with cyclists in mind, but is also useful for runners. While there are still plenty of kinks to work out, the Jet seems to be a promising idea.

Recon was recently purchased by Intel, and many fans of the brand believe even more innovative ideas will be coming soon thanks to advancing technology.

Specs and Features of the Recon Jet

One glance at this futuristic looking eyewear is enough to make anyone curious. Here are the details you should know.

Advantages of the Recon Jet

Here are a couple of benefits of Jet eyewear

The major impression the Jet made is in it’s design and technology. As mentioned before, these glasses give an almost video game like effect. In the right lens there is a display that shows data like time, pace, distance and duration.

You can sync it to your phone via Bluetooth and receive notifications through the display as well. Another really cool addition is navigation. You can have a map right there to aid in your rides or runs rather than having to rely on a separate GPS system.

You can even mark friends on the map so you can keep track of each other while out.

The controls of this device work really well. There are two rocker buttons which are responsible for turning on and off the device, as well as back and select. The main control the wearer will use is the optical touch control. This touch pad sensor is located on the right side of the eyewear.

From here you can swipe between menus and data interfaces. The design of the touchpad is excellent. It is very sensitive to touch, and is still usable if you’re wearing gloves.

Having only 4 hours of battery life is mediocre to say the least, but you can swap low/dead batteries for new ones easily which is a great advantage. Being able to recharge batteries with a basic USB cable is a handy option.

The Jet has impressive technology, and while it isn’t always highly rated, there is a strong belief that future models of the Jet will be even better. For a first product, this headset really created a fanbase for itself.

One really awesome aspect of the Recon Jet Smart Eyewear is that you can use a few apps with it. The major app (which comes with the device) is the camera which is accessed through the Garmin Virb app. Another popular app is Refuel, which gives both nutritional and hydration advice.

It offers this advice in real time which can be useful for athletes that often get caught up in the moment and forget to stay hydrated.

In total there are 10 apps you can add to the device. Simply install via Uplink to access. As more people use the Recon Jet, the more apps will be developed and available to use.

The ability to use various apps is one of the most promising features, since it essentially opens up limitless ways you can use the Jet.

Disadvantages of the Recon Jet

Despite how awesome and innovative the Recon Jet Smart Eyewear seems, its few advantages don’t override the problems this device has.

One of the more serious issues with the Recon Jet is that is restricts peripheral vision. This can be a very dangerous problem for cyclists in busy areas with traffic.

There really wasn’t an alternative placement for the battery pack and computer so they are located on either side of the eyewear’s temples. As soon as you put the device on you’ll immediately notice that your peripheral vision is obstructed.

This is a major issue for cyclists or runners expecting to use this device in areas with heavy car traffic. The risk simply isn’t worth it. Granted, you will get used to the obstruction after wearing the eyewear for a time but that isn’t going to prevent an accident since it causes a significant blind spot.

Your central vision is also slightly obscured because of the screen of the lens, though not to any severe degree. Since the screen and part of the computer housing are on the right lens, it blocks a small amount of the road/trail/terrain ahead of you.

Similarly to the peripheral vision issue, you will get used to this as you wear the glasses.

The Recon Jet is an odd combination of being fairly bulky and heavy yet still feeling fragile in the hand. While they are supposedly pretty durable, you definitely wouldn’t want to risk testing these claims.

There are both camera and video functions on the Jet. The camera is of decent quality and delivers a 1280 x 960-megapixel image. Images taken with the camera are automatically sent to your computer and your Recon Engage account.

Customers who were really looking forward to taking videos can only hope that an app developed will be able to deliver something that will allow you to shoot as long as the battery lasts.

Another little annoyance with the camera, both for video and picture, is that the location of the camera is a bit low and points down to the ground. If you want to capture an image or record something up ahead, you’ll need to tilt your head upwards to do so.

The Recon Jet has a few solid selling points but the issues with design should make customers pause before investing nearly $500. Ideally, you would be able to try on and test out these glasses so consider buying from a retailer that will honor refunds.

The Jet eyewear technology is very promising and certainly worth keeping an eye on, however.

Check out more smart gadgets to look out for