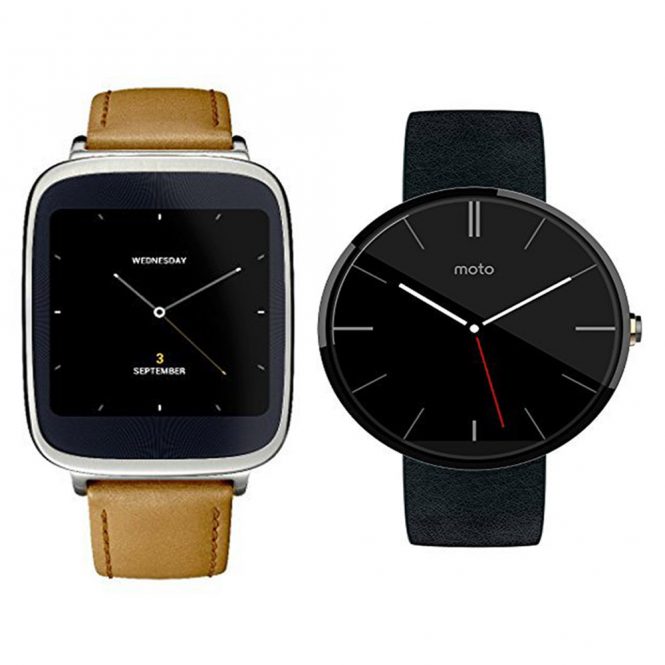 The very first Android smartwatch models were not big on style and looked a bit gadgety at best. However, smartwatch designs have quickly improved and have stepped up their game in the style department recently.

Two of the recent models that offer improved style and functionality are the Asus Zenwatch and the Moto 360. Therefore, we thought we would have a look at both models and see how they compare with one another.

To this point, it has been difficult to find a smartwatch that has the right balance of style, tech and functionality. However, both of these watches seem to do pretty well in all three areas and mark a significant improvement over previous models of smartwatches.

Which watch looks the best will obviously come down to personal preference. Both have their apparent advantages and disadvantages, so it will be the performance of each that makes our decision on which is a better overall value. 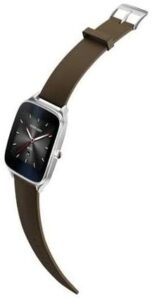 The Zenwatch has a stainless steel body and is not near as large as the Moto. The watch is much smaller and more refined in size, appearance, and style. It is almost 20% thinner than the Moto and has a rectangular face with smooth, rounded corners and a face that contours the curve of the wrist.

Some might even consider the Zenwatch as having a little of a more upscale look in comparison to the Moto 360.

The Asus comes with a battery that is rated for one full day of use, but may last a little longer depending on how much you actually use the watch. It has a nice set of features and is even compatible with Find My Phone if you happen to lose your smartphone. 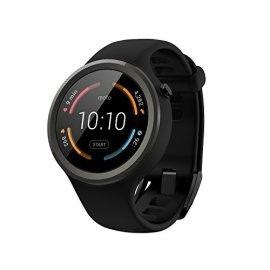 The Moto 360 makes a bold impression at a first glance. It has a circular display that is quite a bit larger than the Zenwatch and the Android notifications have a bold appearance on the face of the watch. Additionally, the Moto is very thick at 11.5 mm, and it is very noticeable.

The thickness and large face add to the bold appearance and is a true signature of the Moto 360. Despite the thickness of the watch, it actually weighs less than the Zenwatch, at 49g vs. 75g.

The Moto 360 is bold has a tendency to look a little more like a smartwatch than the Asus does, but it is still a big improvement on early smartwatch models. While it is not quite as refined in appearance as the Zenwatch, it has a very nice style and is very comparable performance.

The Moto 360 comes with a leather band standard, but there is a $50 steel band option available.

You can find both watches for less than MSRP if you shop around and do your homework. However, we did have a difficult time justifying the $50 starting price difference. Especially because we felt the Zenwatch outshined the Moto 360 just by a small margin.

How Moto 360 Compares to Others 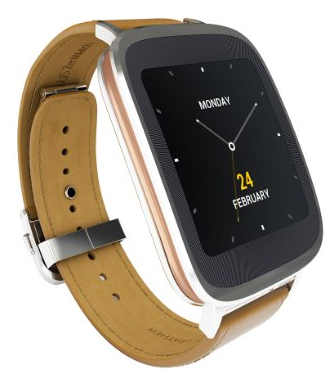 The Zenwatch has a distinctively modern and upscale look without giving visible signs it is a smartwatch. The designers did a nice job at keeping the style modern while still offering a classic watch style look. It comes with a leather band, which goes along nicely with the rectangular face and rounded edges of the watch.

This smartwatch has significant enough size to make you feel like you are actually wearing something without being so large it feels awkward. 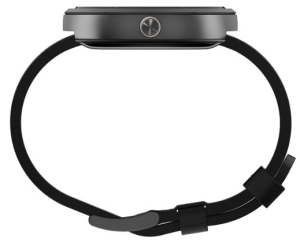 The Moto 360 is relatively large in comparison to the Zenwatch. The face is almost one and a half times larger and it is almost 20% thicker.

When looking at the profile of the watch, the thickness is noticeable and may be a bit much for some smartwatch enthusiasts. However, the usefulness of the large face and easy to read Android notifications outweigh any issues with the thickness or general size of the watch.

ADVANTAGE: The advantage in this category goes to Asus Zenwatch based on its nice modern look without any obvious signs of being a smartwatch. We liked the upscale feel and style of the watch design.

Each watch comes with internal storage 4GB and ram of 512mb. The operation of both watches was comparable in terms of speed and smoothness. We were struck just how much better both of these watches seemed to navigate through the paces than previous smartwatch models we have reviewed.

We were impressed and satisfied with the error-free navigation of both watches and would have to rank them as equals in this department.

ADVANTAGE: Tie, both models performed equally well in basic navigation and operating without glitches or errors.

ADVANTAGE: The advantage goes the Asus Zenwatch due to the more refined look of having a bit of bezel along with the screen. The Moto 360 has almost no bezel at all with a screen that takes up the entire face of the watch.

Both watches are water-resistant up to 30m or 3atm. However, we probably would not want to test either of these in extremely wet conditions and they were not made for sporting activities.

ADVANTAGE: Tie, both have water-resistant capabilities.

Both watches are rated with a battery life that lasts for a full day and sometimes in excess of one full day depending on use. In multiple tests, it seemed 1 day was an accurate rating with moderate and normal use. With light use, the battery life could extend out to even one and a half days.

Key Features of Both Smartwatches

The Moto also has a health tracking application, which not only monitors your heart rate automatically throughout the day, it also keeps track of your health goals and tracks how many calories you have burned during the day. (Based on an estimation)

The Zenwatch comes with a fitness app as well but has a nice added feature. The “nudge” feature will alert you and “nudge” you to get up and move if you have been sitting still for too long (much like the AppleWatch reminds you to stand up every hour). This is a very useful feature and really helps when you lose track of time throughout the day.

One feature of the Zenwatch we actually did not like was the setting that keeps your smartphone unlocked when your smartwatch is within a certain distance. This can be a security issue and this setting should be turned off by users who opt for the Zenwatch.

Final Thoughts: Which Would I Go For Today?

The competition between these two smartwatches is very close. I personally prefer the appearance of the Asus Zenwatch to the Moto 360, however when it comes to ease of use and functionality they are very comparable.  The prices can vary depending on where you shop, but one of the items that pushed myself and our team over the edge was the $50 starting price gap.

For two smartwatches so evenly matched with features, I just had a difficult time justifying the price difference. UPDATE: However, I’ve recently been able to find the Moto 360 on sale for $149 at this listing. This effectively levels the playing field on price, assuming Moto stays at this price-point.

Besides our preference in the style department, we felt the Zenwatch overall was just a bit more refined and the designers had paid a little closer attention to the finer details of the appearance of the watch.

It seemed as though the few extra touches gave the Zenwatch an edge in the way it looked but also made us feel as if it was just a small notch above the Moto 360 in quality, although not by much.

While we did declare the Asus Zenwatch as the winner, it was very close. If you are in the market for a smartwatch, you should take a close look at both of these models and choose the one that fits your personal preferences the best. We are sure you will be very happy with either smartwatch you choose.