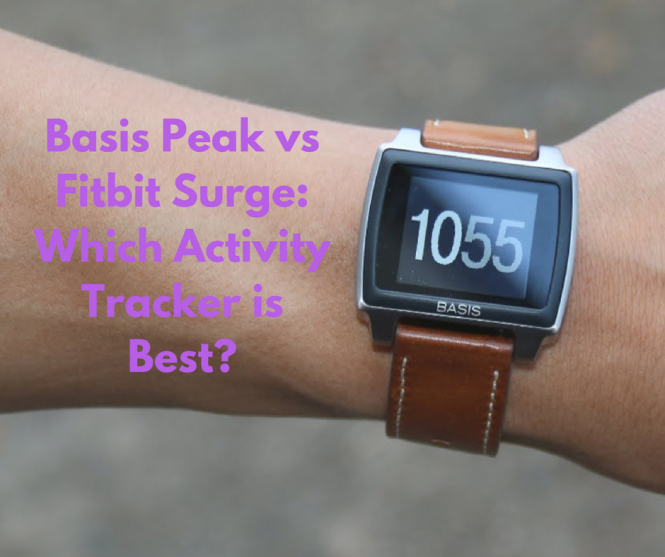 Before the time of full-color LCD screens, activity trackers looked more like traditional digital watches and functioned like high-tech pedometers. The most noteworthy activity trackers released then were the Basis Peak and Fitbit Surge Fitness Superwatch, both featuring a heart rate monitor and long battery life.

These two effectively stamped out their competitors during that time. The others did not have an embedded heart rate monitor or, if they did, their battery life was the pits. But, which of the two is better? 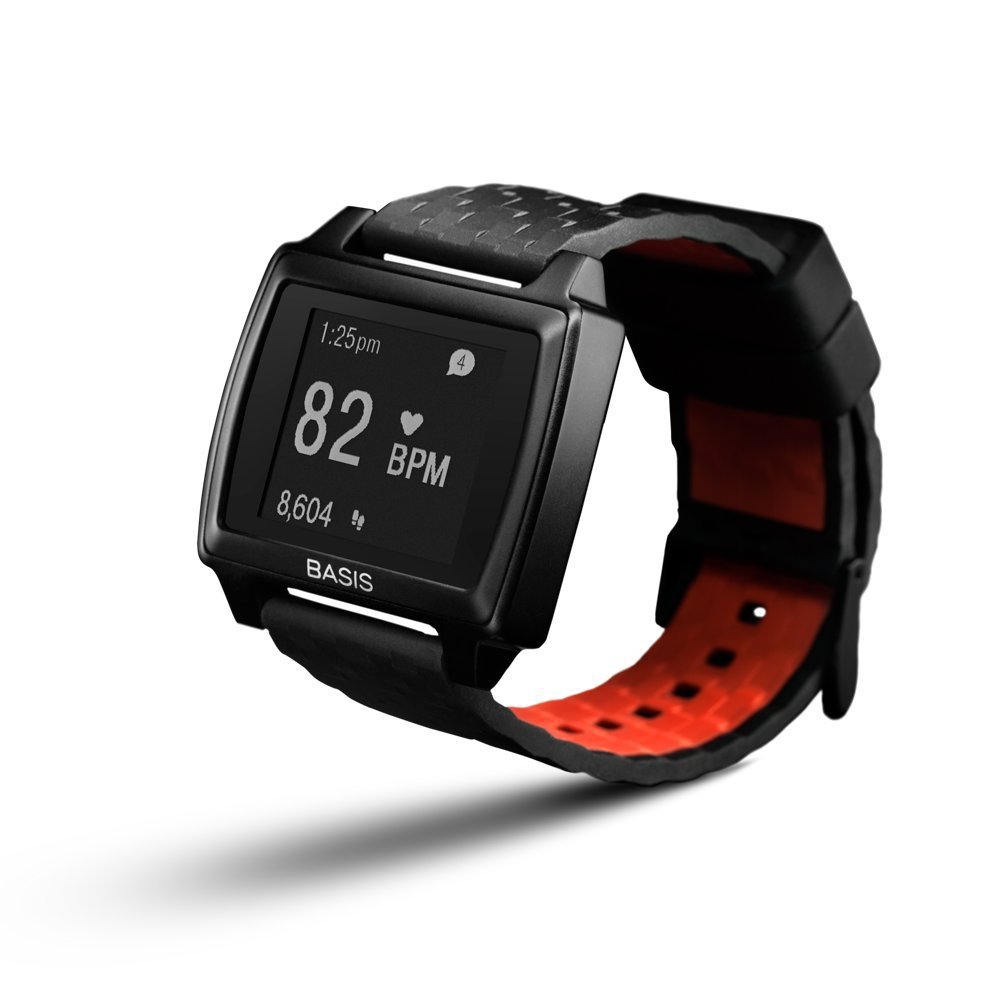 Basis Peak came out with a bang. This came from the company that gave us the Basis B1, which was the first activity tracker that featured a built-in heart rate monitor. The Peak not only keeps track of your heart rate, but it also notifies you when somebody calls. It’s a feature that was seen on more expensive smartphones during that time.

The Basis Peak had two colors: black and white. Compared to the B1, the Peak is smaller and slimmer, with a bigger LCD display that measures 1 inch by 0.75 inches. The Peak also uses a band that looks like the ones you see on traditional wristwatches. Unlike the B1, the Peak is actually very comfortable to wear.

The Basis Peak comes with a very visible display that is protected by Gorilla Glass. It does not have buttons; instead, you use the touch display to navigate through menus.

With the Basis Peak, you can track your exercises, your running, and your workouts. It will automatically detect when you start exercising and the screen will automatically show you the tracking data. When you are done, the Peak will revert back to being a watch. You can even swim and shower with it because it has a 5 ATM rating.

It can also continuously track your heart rate, even as you walk, run, or sleep. It will also track your sleep, sleep stages, and even the number of times you have tossed and turned during the night.

The Basis Peak does what most other smartwatches and activity trackers do: count your steps, monitor your sleep, and monitor your heart rate. You can also get an estimate of how many calories you have burned.

The Basis Peak can connect wirelessly to Android and iOS devices. It will upload all your data so you could view it in the companion app.

The mobile app uses gamification to help motivate you into being more active. You will be completing a series of challenges, such as wearing the Peak for a certain number of hours, making 1,000 steps within an hour, or waking up at 6:00 a.m. every day.

The mobile app offers a lot of data, showing you your heart rate, the steps you have taken, and the calories you have burned, as well as other exercise-specific information. This is a great feature for those who love numbers or those who would like to get details and more information about their activities. You can even plot all of these data and see them all in one chart. 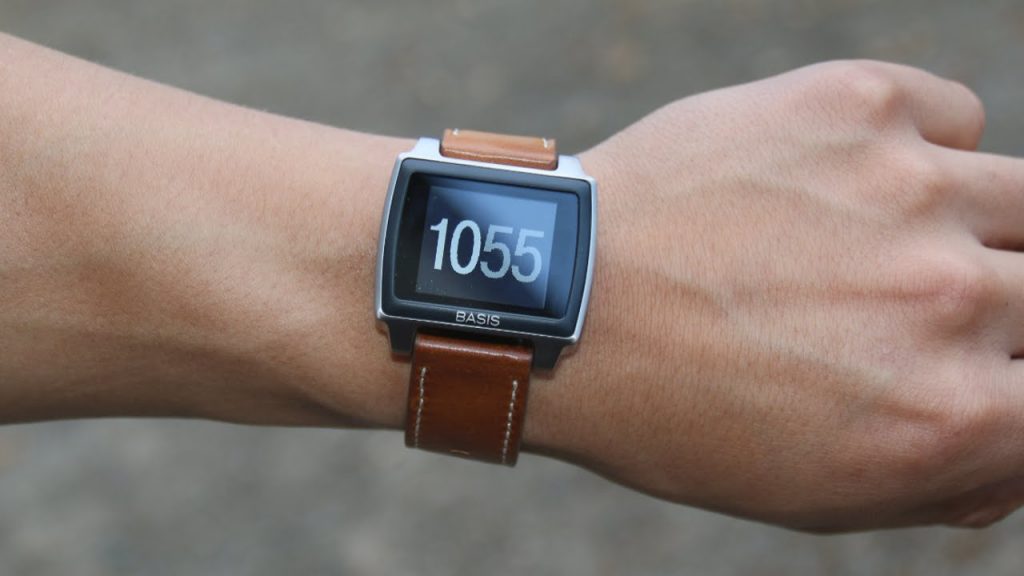 The Basis Peak offers an easy way to track your activity without spending too much on a smartwatch. Its best-selling point is that it pretty much does things on its own. All you have to do is to put it on and it will do things automatically, such as detect what type of exercise you are doing and instantly log your metrics.

This is a great help for those people who keep on forgetting to press a button on their activity tracker for it to start logging.

The Basis Peak also has a longer battery life than most other activity trackers when it first came out. With up to four days of use before needing a recharge, this had one of the longest lasting batteries used by smartwatches during the time of its launch.

The LCD display can be very hard to read when you are under bright light, or out in the sun. However, you can activate the backlight easily by swiping up on the right side of the screen. Unlike most smartwatches that are available today, the Basic Peak uses a monochromatic display.

The main screen shows the time, but not the battery life. What’s more, you need to remember different gestures and swipes to work the user interface. It is not always that intuitive and you need to test out a couple of gestures for it to do what you want it to do.

The mobile app could also use a lot of work. While it gives you access to a lot of your data, it remains to be the worst app in existence. For one, the app does not really do a lot of processing and analysis. So it functions more like you just getting a notebook and taking down all the data on it. The mobile app is also difficult to use and no thought went into its design and layout. Plus, it works pretty slowly.

The biggest problem with the Basis Peak is that it overheats. The Peak was released in 2014, but after a year and a half, the company had to stop selling it because of reports that it overheats. It got too hot that it was able to meet its own charging cradles and burned several users.

Intel and Basis pulled the plug on the Basis Peak and have stopped supporting it by the end of December 2016. All Peak devices have been recalled, and users got their money back. This unexpected ending is also a sad one because the Peak had a lot of things to love about. Its heart rate monitor beats the other trackers when it comes to battery life. While others would require you to recharge every day, at the very least, the Peak can last up to four days with a single charge. Sure, it would have looked better with a full-color touchscreen, but it was perfect for those people who liked a minimalist look, without the frills and even physical buttons to clutter up its aesthetics.

The Basis Peak was not clingy or demanding. You just wear it and forget about it and, at the end of the day, you could still see all of your activity data.

How Does Basis Peak compare to others

Fitbit has several top-notch activity trackers and smartwatches under its belt, but the most comparable with the Basis Peak is the Fitbit Surge. These two also came out around the same time.

The Fitbit Surge Fitness Superwatch takes its cue from the Basis Peak and it includes a heart rate monitor. It features a touch display that you can use to interact with the device. It also has GPS built into it so that you can run, hike, bike, and still get tracking and location data even when you leave your phone at home.

The Fitbit Surge can track different workouts with the multi-sport modes, allowing you to see your stats as you do your exercise, as well as the summaries of everything you have done when you have finished.

The Fitbit Surge can send you notifications from your phone, so you would know when somebody calls or texts you. The 0.82 inch by 0.96 inch display allows you to read your texts and call history.

The clincher is the Fitbit Surge’s long battery life, which gives you up to seven days of battery juice without recharging.

The Fitbit Surge Fitness Superwatch uses several sensors to do its work, including a three-axis accelerometer, GPS, digital compass, optical heart rate monitor, altimeter, ambient light sensor, and a haptic or vibration motor. It can track your sleep quality too, as well as your food intake.

The Fitbit Surge Fitness Superwatch comes in three colors: black, blue, and tangerine. It opts to have a seamless form, meaning there is no break between the face and the strap. However, the Fitbit Surge does not really aim to replace your watch.

For one, its rugged looks make it sorely out of place when you are at the office or when you are attending something formal. It is also bulkier and bigger than the traditional watch, and wearing it looks like you are getting ready to go for a run.

The Surge does not have the looks that you can wear anywhere, anytime. And that is its biggest disadvantage: if you cannot wear it everywhere and all the time, you would be missing out on some stats that your Surge ought to be tracking.

How Does Fitbit Surge compare to others

Comparing the Fitbit Surge and the Basis Peak

On paper, the Basis Peak is an underrated activity tracker that does a lot of things right. It may look similar to the Fitbit Surge Fitness Superwatch, with it monochromatic screen and rugged appearance, but it is much more comfortable to wear than the Surge. What’s more, it does the smart features better. Basis Peak shows you the time by default, unlike the Fitbit Surge that automatically shows you your fitness data.

On top of that, the Peak offers roughly the same features as the Surge. It monitors sleep, counts your steps, and keeps track of your heart rate. It also keeps you notified of the things you received on your phone. It is also more water-resistant than the Surge. You can wear the Peak while you shower or swim, whereas you would need to take the Surge off to do the same.

At the time they first came out, the Surge was selling at around $60 more than the Peak.

One of the plus factors for the Fitbit Surge is its built-in GPS, which allows you to get constant fitness and exercise tracking data even when you leave your phone at home. Battery life is also longer for the Surge.

On paper, the Basis Peak would give the Fitbit Surge Fitness Superwatch a run for its money. You can use your phone’s GPS anyway, so the lack of a built-in GPS is not that much of a problem.

That is on paper. In reality, the Basis Peak is a safety accident that is waiting to happen. The overheating devices only affected a very small percentage of the Peak, but it was enough for Basis and Intel to recall all devices, including the Basis B1. Basis Peak could have been a worthy competitor to the Fitbit Surge had it not crashed and burned.