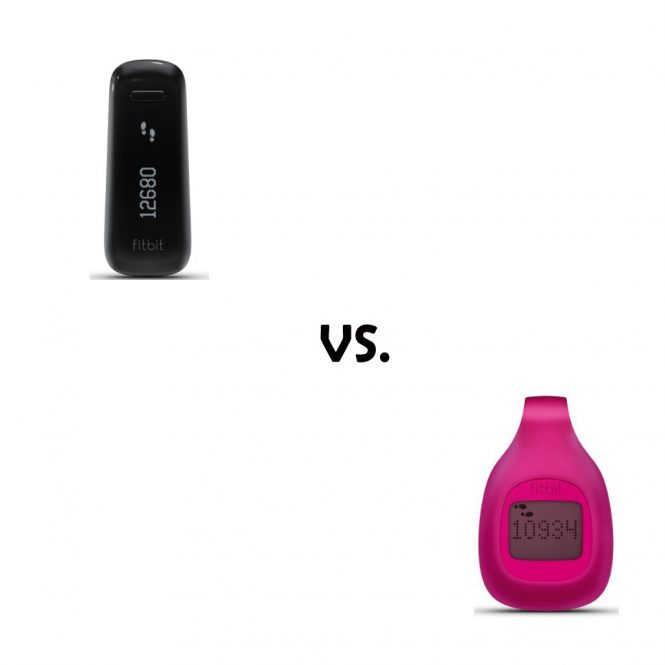 In 2007 the founders of Fitbit decided it was time to begin creating fitness devices that would improve customer’s better health and wellness. With a goal of empowering and motivating its fans, FitBit quickly became a trusted fitness tracker brand synonymous with innovation and quality.

Since its beginning this brand quickly became one of the top manufacturers of these types of products, and only continues to advance and improve their technology line-up.

Within their group of trackers, watches and a scale, there are two models that are often pitted against one another – the FitBit One and the Fitbit Zip Wireless Activity Tracker.

Both are similar enough that it can be difficult to decide which would be the best choice for your particular needs. If you’re feeling stuck and unsure of which tracker is right for you, consider the following.

Bottom Line Up Front: The Zip gives almost all the same data as the One, including access to the FitBit app, but it lacks sleep data tracking. If you want to track your sleep then going with the One is a no-brainer.

Main Differences Between Fitbit One vs Fitbit Zip

The main differences between Fitbit One vs Fitbit Zip are:

Features of the Fitbit One Activity Tracker

Here is a brief rundown of the basics of the One:

Pros and Cons of the Fitbit One

The FitBit One syncs seamlessly with 150 different smartphones, so chances are your phone will be supported. The FitBit app will give you details of how many steps you’ve talked, how many floors climbed, total miles traveled, number of minutes spent active and how many calories you’ve burned throughout the day. This data is delivered in easy to understand graphs and charts.

Rather than being worn on the wrist like a fitness tracker, the One device is built into a strong clip to be worn on clothing. You can clip is onto a pocket, belt, shirt collar or bra.

The clip case is resistant to rain, water and sweat. Keep in mind that the One is only water-resistant, not waterproof, so be sure to take it off if you’re going to get wet. Splashes of water won’t be a concern but you don’t want excessive exposure to water or submersion.

The FitBit app goes beyond just fitness tracking. Aside from seeing the progress you’ve made towards your fitness goals, you can also share data with friends, compete on fitness leaderboards, keep a food diary and earn badges as you complete your goals. The FitBit app also works with other apps like MobileRun, which maps your walks/jogs/run and will sync to your FitBit profile.

Another advantage of the One is its ability to track sleep. Its sleep tracking records depth and quality of sleep, plus the silent alarm vibration offers a much more peaceful way of waking up. This is useful if you have to get up earlier than your partner and don’t want to disturb him/her. Many basic trackers lack this feature.

Overall the One is about as close to a higher tech fitness watch as you can get while still staying in the realm of an economical, basic clip-on tracker.

Features of the FitBit Zip

Here are the main specs of the Zip:

Pros and Cons of the Fitbit Zip

The FitBit Zip is definitely more of a simple fitness tracker, even compared to the One. It collects data on the bare basics – number of steps you’ve taken, total distance traveled based on steps and number of calories burned based on that data. The Zip calculates how many minutes you’ve spent active with this data as well.

Since the Zip is all about simplicity, FitBit gave it a tap screen display function. The display remains off until you touch it, which then brings up your data for the day and a clock.

The way the display functions is part of why this device has such an incredible battery life. While on the display you can flip through your data or just take a peek at the smiley face symbol, which grows as you get closer to your daily fitness goal.

Just like the FitBit One, the Zip syncs to pretty much all major smartphones and comes with a USB cord for syncing to a computer. The Zip has access to all of the same FitBit app features as the One as well.

Another similarity to the One is the Zip’s ability to clip to pretty much any clothing on your body. There aren’t really any complaints about the strength of the clip. When attached to thicker fabric like a waistband or sport’s bra strap, chances are it is going to stay put even when running.

The battery life of the Zip is anywhere from 4 to 6 months depending on use. This is a great advantage but the battery is, unfortunately, not rechargeable. The Zip uses a normal 3v coin battery for power, so this will need to be replaced when the battery gets low or dies. The battery door can be tricky to get off but the included battery door tool does help.

At first glance the Zip looks more like a toy than a tracker but don’t let that fool you. This is a little powerhouse of a tool that is reliable and durable.

Actually Prefer a Wrist Tracker? Similarly, if you would actually prefer a wrist base tracker, the Fitbit Flex might be a better option. You can read more in my Fitbit One vs Flex 2 comparison.

FAQ’s About Fitbit One vs Fitbit Zip

How do I reset my Fitbit One smartwatch?

Resetting your Fitbit One smartwatch requires a few steps. First of all, you should connect your phone to the original cable charger and hold the tracking button for around 12 seconds. That will reset your watch, and next you should press its button until the screen turns on again.

Why is my Fitbit not syncing?

If you are having trouble syncing your smartwatch, go to Settings and try turning on/off the Bluetooth. If this does not work, try logging on another device (phone, tablet or computer) and sinc from there.

Can you have two Fitbits on one computer?

Yes, you can have two Fitbits on once computer as each of them has their unique ID number. However, if you want to use the two, you will have to put two different email addresses.

Which Activity Tracker Should You Buy?

The two major differences between the Fitbit One vs Zip is price and sleep tracking. The One is priced under $100 which is very reasonable, but still $40 more expensive than the Zip.

Bottom Line: The Zip gives almost all the same data as the One, including access to the FitBit app, but it lacks sleep data tracking. If you want to track your sleep then

going with the One is a no-brainer

If you don’t care too much about sleep tracking and you just want a device that’ll give you more than a basic pedometer but less than a fitness watch, the Zip could be a perfect choice.

Both the FitBit One and Zip are fairly similar – they both have basic displays, clip onto clothing, and deliver basic fitness data. There are quite elementary compared to the fitness wearables and watches on the market today (e.g. no built-in gps, etc..) but they are still excellent options for someone that isn’t “techy”.

People who are just starting a new healthy lifestyle or would like to know a little more about their activity levels and progress without having to spend hundreds will appreciate these trackers for what they are.