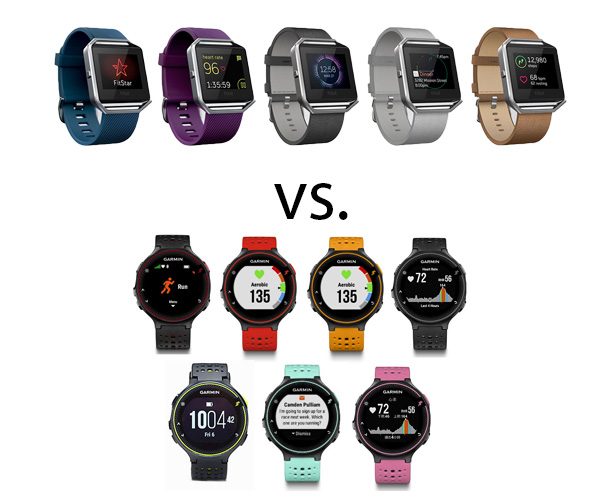 Fitness trackers have been all the rage since tech wearables became popular. They are equally popular among casual users that want to know how many steps they walk everyday as they are with athletes or active persons that want a tracker to keep tabs on their training progress.

Since fitness trackers are still somewhat new to the market, at least those that do more than just function as a pedometer and perform other basic functions, finding a more powerful model can be tricky.

Ditching the simpler trackers but beefier, high-tech fitness watches is a good idea if your focus is on versatility, accuracy, and a wider range of activity tracking possibilities. Two very good brands with a history of quality fitness watches/tracker are Fitbit and Garmin.

Bottom Line Up Front: For most general fitness users, I’d hands-down recommend the Fitbit Blaze as it has a more robust app ecosystem and isn’t built specifically for running alone (like the Forerunner seems best suited for). HOLIDAY PRICING UPDATE: The Fitbit Blaze is also available for 25% off at this listing right now.

Fitbit is overall one of the most widely popular brands, especially considering how loved the Fitbit app is. They have a very nice selection of wearables, so finding one that will work for you isn’t much of an issue. One of their newest trackers is the Fitbit Blaze, which is in the category of a smart fitness watch.

Garmin is a huge, multinational company that is considered a household name. They are very well known for their GPS technology, which automatically makes them one of the more accurate and trusted brands for fitness trackers.

GPS tracking hasn’t only recently become common in fitness trackers and Garmin tends to be a go-to brand for athletes needing accurate tracking over distance. The Forerunner 235 model has been out for a while but is one of their better mid-range models.

Here is how these two advanced fitness watches stack up against one another.

What Does the Fitbit Blaze Do?

The Fitbit Blaze Smart Fitness Watch is marketed as “A fitness watch that’s as stylish as it is smart”. Unlike some of the more basic fitness trackers, the Blaze does look like and function as a smart watch. It is very attractively designed and has a display. Also, as it is a smart watch rather than purely a fitness tracker the Blaze will show notifications when synced to your phone.

Here are some of the purchasing specs for the Blaze:

Fitbit breaks down their tracker/watch abilities into two categories – the Essentials and additional Breakthrough Features.

Essentials for the Blaze include:

Breakthrough Features for the Blaze include:

Fitbit really made the Blaze to function as a serious fitness tracker, but also look nice enough that you’ll want to wear it all day. The Blaze also has a very nice sleep tracker which further prompts customers to wear this tracker all day as they would with a normal watch.

The Fitbit app is very effective and the interface is easy to use as well as pleasing to the eye. This dashboard will allow you to look over your post-workout summaries in greater depth, analyze any trends you find in your daily activity, look over your sleep quality, and even help you keep track of your nutrition. It also offers some social media functions for connecting with others and sharing workouts.

How does Fitbit Blaze compare to Others?

What Does the Garmin Forerunner 235 Do?

Garmin is fairly no-nonsense when it comes to their tracker/wearable designs. For the most part they look like a fitness watch and are designed with durability in mind. The Garmin Forerunner 235 is no exception, and though it may not look as fancy as the Blaze it is still a super accurate watch.

The purchasing specs for the Forerunner 235 include:

The Forerunner 235 is considered by Garmin to be a Sports & Recreation watch, but it is in the running category and marketed simply as a ” GPS running watch with Wrist-based Heart Rate”.

With this watch you can:

The Forerunner 235’s main two features are super accurate GPS tracking and it’s Elevate heart rate monitor. Elevate will track your heart rate 24/7 and since it is located in the wristband you won’t need to wear an uncomfortable chest strap.

As for GPS technology this watch is compatible with GPS and GLONASS. Regardless of where you are you will be able to see your location live on the watch display. The Forerunner 235 is equally at home tracking in a gym or on a track as it is on outdoor trails.

Similarly to the Blaze, the Forerunner 235 also lets you download workout plans and track your own individual workout goals via Garmin Connect. The Forerunner 235 is also compatible with other Garmin products like watch bands and a foot pod tracker.

How Does Forerunner 235 compare to Others

Which is the Better Tracker?

Deciding between the Blaze and the Forerunner comes down to three main factors – Price, Accuracy, and Aesthetics.

The Blaze looks very stylish and you have the option to use different wristbands, including those in bold colors for a pop or luxurious, soft leather. The square watch face looks very modern and isn’t too overwhelming in size.

Price-wise there is quite a difference, especially if you’re on a budget. The Blaze is less money, only about $200 (Fitbit Blaze Smart Fitness Watch) if you select one of the 3 basic colors. For an all-day tracker that also has GPS and heart rate built-in this is a very reasonable price.

Speaking of accuracy, the Blaze isn’t an inaccurate device at all but it is designed more for casual or moderate use.

The Forerunner 235 is really more of a watch for athletes, specifically runners, so if you fall into that category or plan on primarily using your tracker for running/marathons/etc, you will be happier with this model. It is simple, easier to use and just does the job day in and day out without much effort on your part.