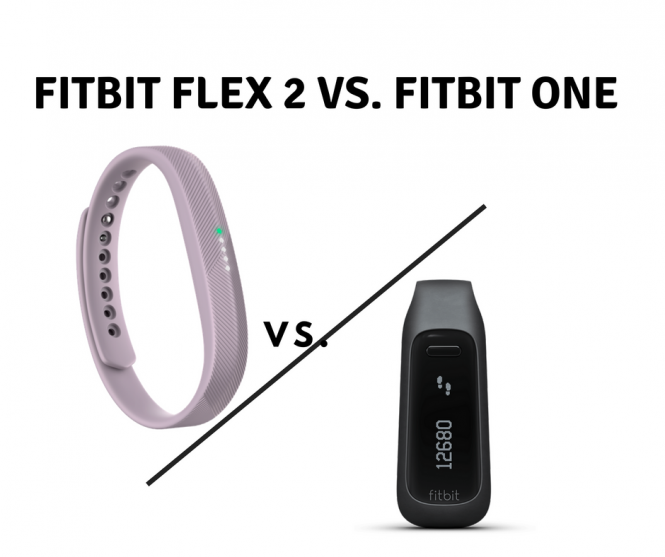 There are people who like to keep fitness tracking simple. They prefer to have a simple device without screens as they already have their smartwatches or they simply do not want to be bothered with one.

Fitbit has two devices for them: the Fitbit Flex 2 and the Fitbit One. Which one is the better buy?

The Fitbit Flex 2 is a very affordable fitness tracker that is also very slim, lightweight, and comfortable to wear. You can wear it together with a traditional watch without looking silly. It has two components: the tracker itself and its rubber strap. You can switch bands because there are many different colors available, allowing you to match your Flex 2 with whatever you are wearing or with your mood. Color options for the band includes lavender, magenta, navy blue, and the traditional black.

Compared to the original Flex, the Flex 2 improves on the clasp to secure the fitness tracker on your wrist. There are also optional accessories that allow you to wear your Flex 2 as jewelry, such as bangles and pendants.

The Fitbit Flex 2 can track the number of steps you take, the calories you burned, and the distance you travelled. If you have been sedentary for a long time or if you have not reached your step goals, the Flex 2 can tell you to move.

It can also recognize what type of exercise you are doing, so you can get a more accurate count. It can also monitor your movements or the cadence for these exercises.

The Fitbit Flex 2 uses Fitbit’s app and this helps make your fitness journey more fun. The mobile app has some great challenges and it records your achievements. It also gamifies your activities, allowing you to challenge your friends to friendly competitions or to complete adventures. For instance, the app has this Vernal Falls hike, which challenges you to do 15,000 steps. As you walk around, the Flex 2 will not only count your steps, it will also show you a map of a virtual Vernal Falls, and show you how far you have traveled. As you reach a certain number of steps, you would be able to unlock journal entries that talk about what you would see at that point if you were really walking in the real-world Vernal Falls.

As a fitness tracker, the Flex 2 is very basic. It does not have GPS, GLONASS, or even a heart rate monitor, which could have provided more advanced fitness data. Then again, there is no display on the Flex 2, which means you cannot even use it to replace your watch.

While the Flex 2 can recognize the activity that you are trying to do, allowing it to more accurately track your exercise, you would still need to manually set it if you are going swimming.

The Fitbit Flex 2 has a battery that can last around four to five days on a single charge. That is quite good, but you would not love how you need to pop the tracker out of the band before you could charge it. The tracker also charges slowly, often needing a few hours to fully recharge. For a fitness tracker that does not have a display or GPS, the battery life could have lasted far longer than the five days.

Final say about the Fitbit Flex 2

The beauty of the Fitbit Flex 2 is that it is a tracker that you can forget. You can put it on after charging, and because it is so comfortable, you would not really notice that it is there until it vibrates or flashes its LED lights when you receive a notification. You can take a bath or go swimming with it.

Nevertheless, this tracker is very affordable and it does a good job of keeping track of basic fitness metrics.

The Fitbit One came out in 2013, at around the same time the original Fitbit Flex was launched. The Fitbit One brings together a three-axis accelerometer, an altimeter, and a vibration motor inside very modern-looking device with an OLED display. The capsule-like tracker measures 1.89 inches long and you can clip it on your clothes.

If the Fitbit Flex 2 is worn on your wrist, the Fitbit One is much more flexible with its metal clip that is covered with silicone. The Fitbit One has two color choices: black and burgundy.

The Fitbit One has one physical button. Press on this button and you can view different metrics: steps, calories, and stairs climbed. You can even check the time. There are also times when the Fitbit One shows you a personalized comment to help you become more active.

The Fitbit One package has everything you need, including the tracker itself, the metal clip, and a USB dongle that you can insert into your desktop computer and use to send data. It also has a wristband made out of cloth so that you could comfortably wear the Fitbit One when you sleep.

The Fitbit One also sends data to the Fitbit app using Bluetooth.

What could be better about Fitbit One

One of the things you would like about the Fitbit One is that it is very easy to forget that you are wearing it. Unfortunately, the Fitbit One is not waterproof. Therefore, you would probably destroy it when you forget and end up tossing it into the wash along with your clothes.

Also, getting accurate sleep tracking takes a lot of work. For one, you would need to detach the Fitbit One from the silicone clip enclosure and slip it into the cloth wristband, and you have to remember to do it or some sleep tracking data will be missed on some nights.

How do these two fitness trackers compare to each other?

The Flex 2 and the Fitbit One were both first introduced with a price tag of $99.95. Over time, however, the Fitbit One is no longer being offered while the Flex 2 has undergone several price cuts down to its current $59.95.

Both the Fitbit Flex 2 and the Fitbit One are able to track the number of steps you make, the distance you travel, and the calories you burn. However, because the Flex 2 does not have an altimeter, it cannot tell you how many floors you have climbed, which the Fitbit One can do.

Another metric that the Fitbit One can give you that the Flex 2 cannot is the quality and duration of your sleep.

Both of these trackers came out at a much earlier time than the current fitness trackers available on the Fitbit website, so it is expected that it should have fewer technologies on board. Both also do not have heart rate monitors and GPS.

The Fitbit One is more or less a pedometer with more smarts. It can track your fitness data and sends it to the mobile app where you could get more insights from the numbers.

The Fitbit Flex 2, however, has more features that are not present in the Fitbit One. You could pair it to your smartphone and get text and call notifications. It can automatically identify the exercise you are doing so it is able to track things more accurately. It is also capable of reminding you to move.

The Fitbit Flex 2 is swim-proof, too. There are also accessories available for the Flex 2, allowing you to wear it as jewelry.

The Fitbit One, on the other hand, will be okay even if you put it in a place where the temperatures drop up to -20 degrees Celsius, which 10 degrees colder than what the Flex 2 can withstand.

While both Fitbit Flex 2 and One use lithium polymer batteries, the Flex 2 has a disappointing battery life at only 5 days max. The Fitbit One can last up to two weeks on a single charge.

Side-by-side comparison: Fitbit One and the Fitbit Flex 2

If you only need to keep track of your steps, distance, calories, and the flights of stairs you have climbed, then the Fitbit One is a perfect fitness tracker for you. The bad news is that you would probably have a difficult time finding one on sale now.

The Fitbit Flex 2 is a good alternative. It might not have sleep tracking or an altimeter, but it still can give you an easier time tracking your steps, distance, and calories. What’s more, the Flex 2 is much more convenient to use than the Fitbit One.