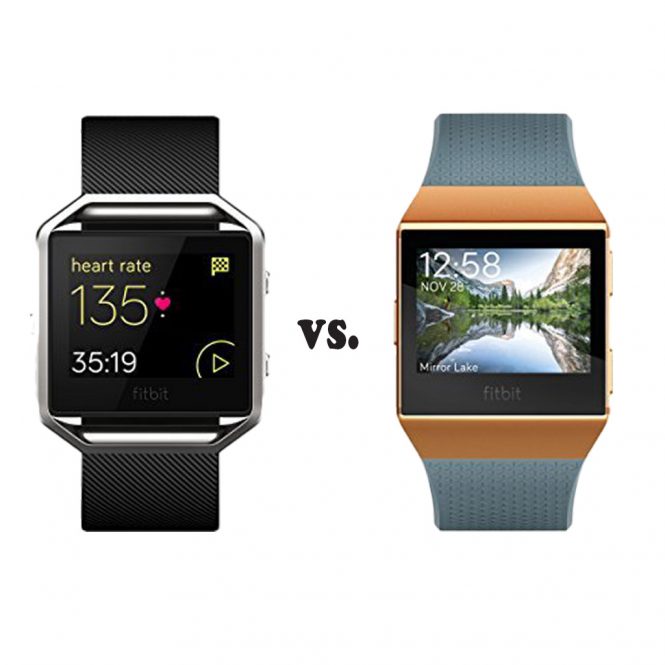 Fitbit is the leader when it comes to fitness trackers. The company has been constantly innovating and listening to its customers to come up with improved products.

In 2016, they came out with Fitbit Blaze, the company’s first smart watch. More than a year since then, the company presented the Fitbit Ionic. How do Fitbit’s two smartwatches compare with one another?

Both the Fitbit Blaze and the Ionic make use of a color touchscreen, but the Ionic has a bigger screen at 1.47 inches on all sides offering a resolution of 348 pixels by 250 pixels. The 1.25-square-inch display on the Blaze has a resolution of 240 x 180 pixels. Similarly, both use a lithium polymer battery but the Blaze’s battery last a day longer than that of the Ionic.

If you have a very active lifestyle and you prefer a smart watch that can handle more than the regular bumps and scratches, then go for the Ionic. Its aerospace-grade aluminum is not only more durable than the stainless steel used on the Blaze Smart, but it also provides a cleaner aesthetics for the Ionic.

When it comes to memory, the Blaze wins by being able to store 7 days’ worth of minute-per-minute fitness data and 30 days of daily summaries. The Ionic can handle up to 7 days of all your fitness data, and nothing more. In fact, it is recommended that you sync your Ionic every day.

It’s a tie. The Fitbit Blaze and Fitbit Ionic undoubtedly are two of the best-looking smartwatches available now.  But if you like to keep things budget-friendly, would want more battery life and more memory, and you want to have more choices when it comes to the colors of the watch and the material casing, you should go for the Blaze.

But if you want a smart watch with a bigger screen and can handle stronger bumps and scratches than ordinary, then go for the Fitbit Ionic.

Both the Fitbit Blaze and Fitbit Ionic have the following sensors:

As such, these two smartwatches can track the same things such as the steps you have taken, the calories you have burned, the elevation you have climbed, and the quality of your sleep.

They can also act like a regular watch, displaying the time and date. Both smartwatches can also remind you to move when you have been sedentary for a certain period of time. Other features offered by the Blaze and the Ionic are:

However, the Fitbit Ionic has some things that the Blaze does not have. For instance, it has an embedded GPS sensor. It makes use of GLONASS and a temperature sensor that gives you wider coverage and more accurate readings.

The Blaze fitness tracker, on the other hand, would need to rely on your smartphone’s GPS in order to track location accurately.

The Fitbit Ionic is also water-resistant for up to 50 meters, which means that you could take it swimming. If swimming is part of your workout, then you simply must choose the Fitbit Ionic over the Fitbit Blaze.

Fitbit Ionic: When it comes to fitness features, the Fitbit Ionic, with its onboard GPS sport watch and water resistance, allows you to do more and to track your swimming times and location more accurately.

Both the Fitbit Blaze and the Fitbit Ionic have limited smartwatch features. Using either one, you can get notified if you receive a call or text message, you can be reminded of your appointments, and you can control the music on your smartphone.

Further, if you get stressed, the Fitbit Ionic and the Fitbit Blaze would be able to give you guided breathing sessions to help you relax. You cannot, however, reply to the text messages or answer calls with your Blaze or Ionic.

The Fitbit Ionic can do more than the Fitbit Blaze. For one, you can save your favorite music on the Ionic itself. This makes sense because the Fitbit Ionic has an embedded GPS that allows you to leave your phone while you bike or run. Because you have music stored on your fitness tracker, you can still work out to your favorite tunes even when you do not have your phone around.

The Fitbit Ionic also comes with a near-field communication chip. This NFC chip allows you to pay with your smartwatch. So between the Fitbit Blaze and the Fitbit Ionic, you are freer and lighter when you have the Ionic as you can leave both your wallet and phone at home.

Another less advertised feature that is exclusive with the Fitbit Ionic is the ability to create your own watch faces. With the Fitbit Blaze, you are stuck with the clock faces that they offer. If you do not like any one of the offered watch faces, tough luck because you just need to live with the one you hate the least.

Not only that, but you can also create your own mobile apps. Fitbit has a developer community that allows you to download their SDK so that you could easily create mobile apps for your Fitbit Ionic and other future Fitbit devices.  For instance, the Fitbit Ionic has a temperature sensor that works with its GLONASS GPS sensor for more accurate location readings.

But you can create an app that would be able to use this temperature sensor to also check your body temperature to alert you if you might have a low-grade fever and so you can refrain from exercising. Or you can use this sensor to gauge how hot it is outside so that it could check your heart rate and your activities.

This could be a great way to avoid accidents and injury during a heatwave. With the Fitbit Blaze, you cannot even download apps onto your watch to extend its functionality.

Fitbit Ionic. The ability to add more apps and even create your own is a surefire way to get the most out of your device. This brings the Fitbit Ionic a bit closer to competing with the Apple Watch and Android Wear smartwatches.

You may argue that devices using Watch OS or Android Wear still win because there is already a thriving number of mobile apps available for these smartwatches, but you have to remember that a lot of developers would love to gain access to millions of Fitbit users. The company already has a preliminary App Gallery, which would be its app store.

And it has made its SDK available for those interested in creating their own apps. It would only be a matter of time before we could expect more and more developers to put out an increasing number of mobile apps for Fitbit devices.

Fitbit is really showing its customers that it is serious about dominating both the fitness tracker and the smartwatch space. The company should be commended for not taking any shortcuts to deliver a smartwatch with its own operating system, design philosophy, and features.

In short, the company chose not to use Android Wear because it wanted to deliver its own brand of the smartwatch to their users, who have come to expect a certain look and a certain experience from Fitbit devices.

The company made a good introduction into the smartwatch space with the Fitbit Blaze. It was a good smartwatch for fitness buffs.

But the Blaze simply could not compete with other smartwatches. Even with its $200 price tag, there were a lot of things missing from Fitbit Blaze: no NFC payments, a limited array of watch faces to choose from, no mobile apps, and not even water-resistant.

Fitbit narrowed the gap between itself and its smartwatch competition by coming up with the Fitbit Ionic, which offers the things that users would have wanted in the Fitbit Blaze. As it is now, the Fitbit Ionic is a much worthy competitor for the Apple Watch. But it would need to show that mobile app developers are on board and mobile apps are coming soon.