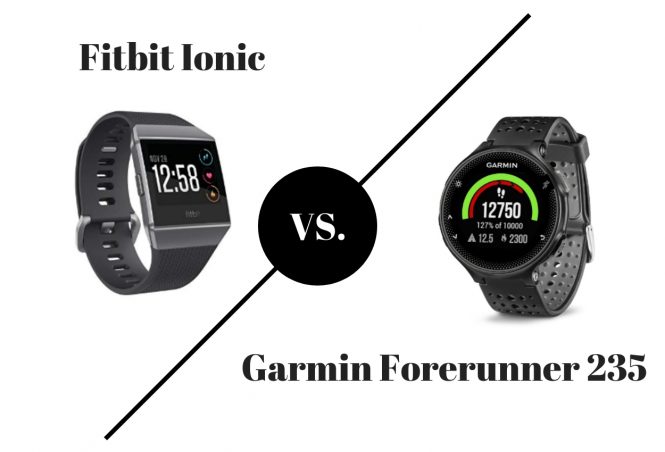 An estimated 71 million smartwatches were sold in 2018. The popularity of these devices is going to continue, and it is expected to grow by around 20 percent annually over the next five years. This trend is the reason why manufacturers are looking into launching their own smartwatches to get a slice of that very lucrative pie. There are several smartwatches out there, and some of them have a focus on health and fitness such as the Fitbit Ionic and the Garmin Forerunner 235. How does one compare to the other? More importantly, which one should you buy?

A light aluminum body, but heavier than Forerunner 235.

A better sensor system, for a wider and more precise way of tracking data

The belt is made of silicone and the screen is crystal.

Has a GPS, GLONASS anntena for tracking, and smart notifications.

The main differences between Fitbit Ionic vs Garmin Forerunner 235 are:

When Fitbit releases a smartwatch, it is difficult not to take notice. The company is known for its fitness trackers, and the closest it ever came to having a smartwatch was with the Fitbit Blaze. The Fitbit Ionic GPS Smart Watch is the company’s first smartwatch, and it offers some excellent stuff you will want.

The Fitbit Ionic measures 29.2 by 21.0 millimeters and weighs around 50 grams. The Ionic has an aluminum body that helps keep the weight down, as well as giving the smartwatch a more premium look. Meanwhile, the included band uses an elastomer material that is both flexible and durable.

The smartwatch has three physical buttons that you can use to interact with the watch. Aside from these buttons, you can also register your inputs using the 36.0-millimeter touch display. The full-color touchscreen delivers resolutions of 384 by 250 pixels and 1,000 nits of brightness, allowing you to see your fitness information and other data even when you are under the heat and glare of the sun.

Because of its low weight and how unobtrusive it is, you can go about your day without the Fitbit Ionic bothering you. You can type on any keyboard comfortably without your smartwatch snagging on its edges. As such, it should be no problem wearing the Ionic all day. You can even take it swimming because the Fitbit Ionic is waterproof with a 5 ATM rating.

Features of the Fitbit Ionic

There is no doubt that the Fitbit Ionic looks good, but does it offer the features you need?

The Fitbit Ionic has a wide range of sensors that allow it to do its job. It has an accelerometer and a gyroscope that can count your steps, calories burned, and measure your sleep. It also has an altimeter that can take note of elevation data so that you can include the flights of stairs climbed in your fitness data. It even has an embedded GPS sensor and an optical heart rate monitor.

The Fitbit Ionic gives you personalized insights and coaching using all the data it gathers. The Fitbit Ionic has onscreen workouts that you can follow to make sure that you are doing your exercises right.

With a global positioning antenna embedded in the Ionic, you can get location data along with your fitness information. This feature adds more in-depth information such as distance and pace. You even get a map of your route once you are done with your run or hike. The Ionic can also connect to GLONASS satellites.

The Fitbit Ionic GPS Smart Watch has the SmartTrack feature that automatically recognizes what type of exercise you are doing. It will then start recording your workout. You can get credit for your activities even if you forget to set your Ionic to track. The Ionic also delivers heart rate zones that allow you to get more in-depth data about your cardio health.

You can know when you are in your peak zone, or if you are in your fat burn zone. On top of these, you can also get help relaxing with guided breathing sessions on your Ionic. You can also get better insights into your sleep stages, your resting heart rate, and cardio fitness level. Women can also use the Fitbit app to track their menstrual and ovulation cycles and include these into their fitness tracking.

The Fitbit Ionic has onboard storage that allows you to store and play music right on the watch. You can also use Pandora and Deezer with your smartwatch. Apart from that, you also get smart notifications and alerts from your smartphone. When you get a call or a text, your Fitbit Ionic will buzz to let you know.

If you pair your Ionic with an Android phone, you can also send quick replies to any message you get on your smartwatch. The Ionic also comes with a near-field communication chip that enables wireless payments. With Fitbit Pay, you no longer need to take out your wallet; you can just pay with your Ionic.

With close to 4,000 reviews giving their opinions on the Fitbit Ionic, this smartwatch receives a rating of 3.6 stars out of 5.0 on Amazon. Verified users love how this smartwatch performs excellently as an activity tracker. They also like the fitness-focused features of this watch, as well as the Fitbit app that gives them a lot of useful insights.

However, some reviewers do complain that the Fitbit Ionic does not have too many smart features. You can get alerts from your phones, but you cannot interact with it, such as being able to reject calls or use canned responses. Others warn potential buyers that their Fitbit Ionic broke down only after a few months. Pricing for the Fitbit Ionic ranges from $220 to $260.

The Garmin Forerunner 235 measures 45.0 by 45.0 by 11.7 millimeters. The Garmin smartwatch is bigger than the Ionic, and it will stand out on your wrist. It is very light as well, weighing in at 42 grams. The Forerunner 235 has a display size of 31.1 millimeters with resolutions of 215 by 180 pixels. The display is a transflective memory-in-pixel screen that is very visible even in dim light or under the glare of the sun. The screen is not as vivid as you will like, but it does its job.

The Garmin Forerunner 235 is a runner’s watch, and it has some advanced features that you can expect from more expensive devices. For instance, the Forerunner 235 has a VO2 max gauge that can tell you how much oxygen may be processed by your body. This number is an indicator of how fit you are. The Forerunner 235 also features a recovery advisor that will tell you when it is okay to start exercising again.

The Garmin Forerunner 235 has both a GPS and GLONASS antenna on board. It also has an accelerometer and a heart rate monitor. All of these sensors allow the device to track your fitness data. The Forerunner 235 can easily count your steps, calories burned, distance traveled, and sleep. It can also tell you to move when it senses that you have been sedentary for a long time, and it can also set fitness goals automatically.

The battery on the Garmin Forerunner 235 lasts for a maximum of nine days when used in smartwatch mode. When you turn the GPS on, the battery can still give you up to 11 hours of juice.

Active runners are sure to appreciate the features that the Garmin Forerunner 235 provides. It is very thin and lightweight, and it tracks all the important aspects of your fitness and more. You can even customize its display. It also has GPS and a heart rate monitor built-in.

On Amazon, the Garmin Forerunner 235 gets an average rating for 4.1 stars out of 5.0, with more than 1,500 people leaving their reviews. People like its fitness features with the always on display with your latest fitness data on the screen. They also love the long battery life on this device, even with the heart rate monitor and GPS turned on.

People also praise how easy it is to export your data from the watch to another fitness app. However, some reviewers warn interested buyers that this smartwatch’s smart features are very basic and might not satisfy those who are looking for a good watch. Other complain that the Garmin Forerunner 235 is made with cheap-looking materials. People expected it to have so much more than the flimsy plastic build. On online retailing sites, prices for this smartwatch range from $195 to $260. However, you can get the Forerunner 235 from Garmin’s online store for $199.99.

The Ionic also offers onboard storage for your music files. The Fitbit Ionic also has a bigger screen despite having a smaller size. The colors on the Ionic’s display is more vivid than the Forerunner 235. Further, if you have a Windows Phone, you can only pair with it the Fitbit Ionic. Also, the Garmin Forerunner 235 does not have an NFC chip, so you cannot use it for wireless payments. You can pay with your Fitbit Ionic.

Where the Garmin Forerunner 235 wins

Fitbit, however, made sure that the Ionic’s display gets brightness up to 1,000 nits to make up for having an LCD screen. The Garmin Forerunner 235 is also lighter, making it more comfortable to wear on a run. It also has a better battery life, lasting almost twice as long as the Fitbit Ionic on a single charge. Even in GPS mode, the Garmin device lasts an hour longer than the Ionic.

To make it easier for you to choose between the Garmin Forerunner 235 and the Fitbit Ionic, here is a rundown of the differences between these two.

The Fitbit Ionic GPS Smart Watch and the Garmin Forerunner 235 are both smartwatches, but they are geared towards different target markets.

The Garmin Forerunner 235 is marketed towards runners, while the Ionic wants to be a general purpose, a fitness-related smartwatch. However, Fitbit’s smartwatch performs well when tracking your runs.  This fact narrows the gap between these devices when it comes to running. The Fitbit Ionic is also more advanced when it comes to features, having been released two years later than the Garmin Forerunner 235.

Both of these smartwatches have excellent activity tracking capabilities, but both struggle when it comes to the smart side of things. Overall, you will do better if you buy a Fitbit Ionic rather than a Garmin Forerunner 235. True, the Fitbit Ionic is around $30 more expensive than the Garmin Forerunner, but you will be getting a capable fitness tracker not just for running, but also for other types of sports and exercises. It seems like a small tradeoff to have a smartwatch that not only looks better but is also more useful than the Garmin Forerunner 235.

What’s the difference between Fitbit Versa and Fitbit ionic?

Both smartwatches have similar features which include water resistance, ability to text, track steps, play music and the main difference between them is that Versa lacks GPS, and the ability to take calls.

What is Fitbit Coach Premium?

Fitbit Coach Premium is a subscription service that allows guided programs and workouts of different types in order to motivate you to be more active, healthy and to achieve goals in a more efficient way.

Does the Garmin Forerunner 235 has Spotify?