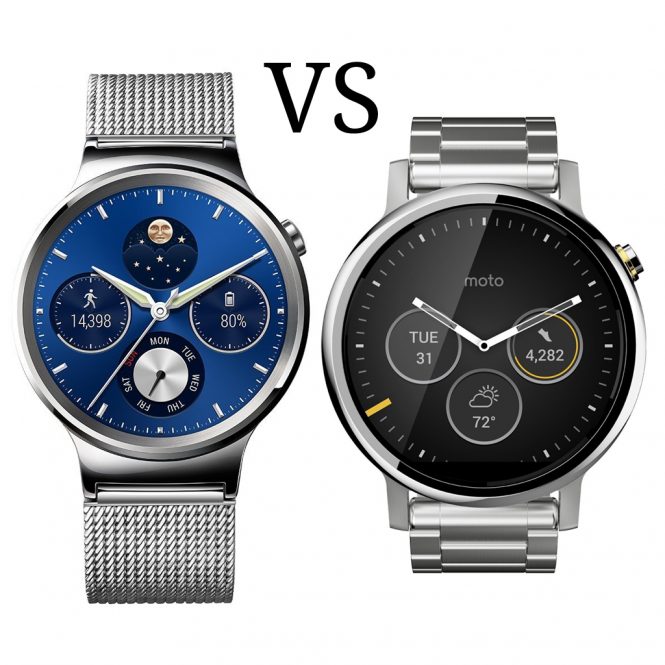 Android Wear powers some of the best smartwatches available now. Google has given smartwatch manufacturers a platform that would allow them to deliver the best smart features to their users. Not only that, it is an operating system that can take advantage of a whole range of apps.

With Android Wear, you can be sure that different smartwatches using it would offer pretty much the same features and functionalities, and even use the same apps.

Two of the best smartwatches running on Android Wear right now are Motorola’s 360 and Huawei Watch. With their smarts coming from the same operating system, it is up to Huawei and Motorola to come out with better hardware to edge the competition out.

Which one should you buy? 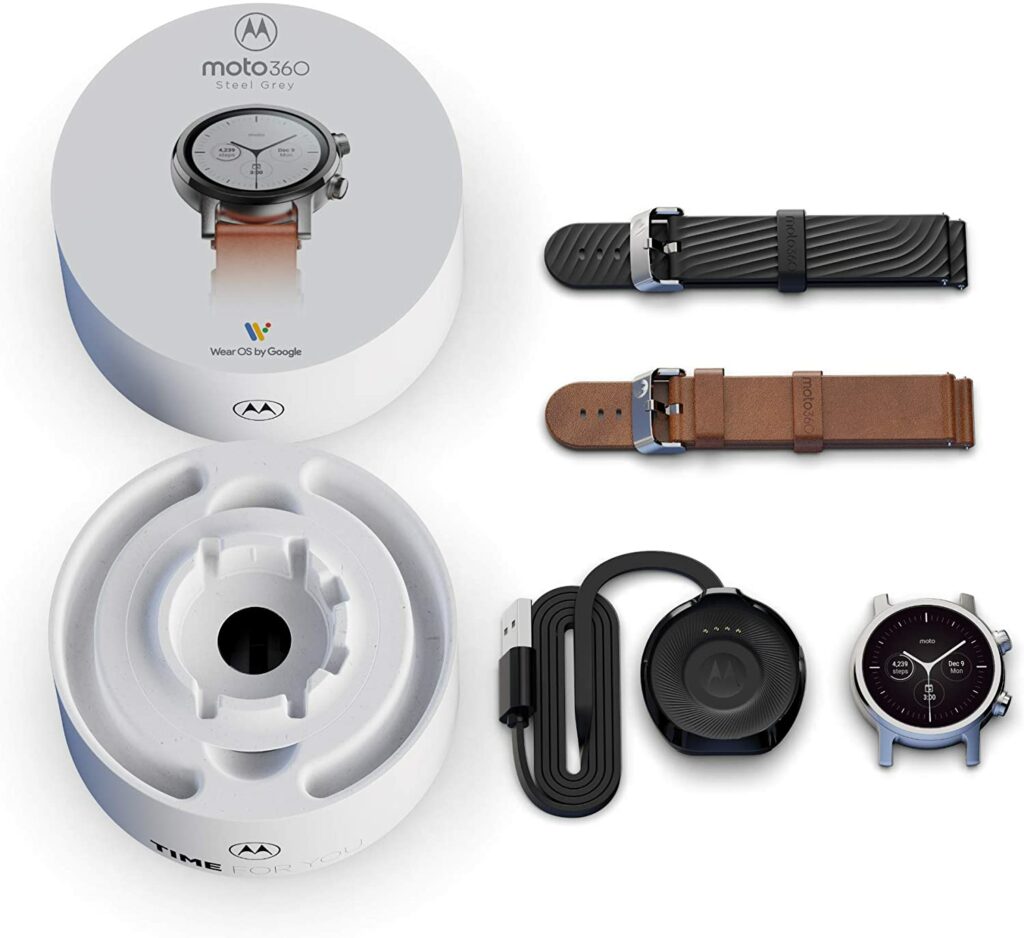 Whether you admit it or not, smartwatches are, first and foremost, accessories, so it is important that it fits your style and you like the way it looks. Let us start with the looks and the design of the Moto 360 and the Huawei Watch.

The Moto 360 gives you a classic look. From afar, you would not know it’s a smartwatch because it looks like a traditional watch. It comes in two case sizes: 42 mm and 46 mm. The 42-mm case can be customized for men and women. The Moto 360 has a polished bezel with a very large viewing area. In fact, the watch face is mostly taken up by the display.

There are three color options for the bezel, which is made of the same stainless steel used for aircrafts: black, silver, and rose gold.

When it comes to bands, there are three band lengths available: 16 mm, 20 mm, and 22 mm. Materials available are stainless steel and leather.

You can even choose the double-wrapped leather bands for the ladies. The idea is that you could easily find the right-sized Moto 360 for your wrist, and it is easy to change the bands and bezels, allowing you to have a new look for your smartwatch as often as you want a change.

Meanwhile, the Huawei Watch also comes in two case sizes: 42 mm and 44 mm. The case thickness depends on what style you buy. It ranges from 11.3 mm to 12.9 mm. The Huawei Watch uses a standard 18-mm band. Like the Moto 360, it uses a form of aircraft-grade stainless steel – cold-pressed 316L – for the casing. You also have a choice between fine leather and stainless steel strap.

Overall, the Huawei Watch uses premium materials. For instance, if you compare the leather straps of these two smartwatches, you would find that Huawei Watch’s leather strap looks better and has a premium feel. There is not much difference in the stainless steel bands, though, so it is all just a matter of preference.

The Moto 360, however, allows you to pick and choose everything from the bezel, case, straps, and size. You can mix and match everything, so you have more granular control over how your Moto 360 would look like.

With the Huawei Watch, you can choose from a wide variety of styles the company has put together. 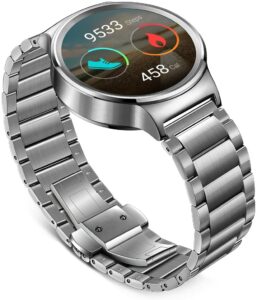 Display type. The Huawei Watch uses an AMOLED display, while the Moto 360 uses an LCD display. You would not have problems looking at the AMOLED screen of the Huawei Watch, even under the most intense glare of the sun.

The Moto 360, on the other hand, compensates for having an LCD screen by using backlights. Speaking of screens, the protective glass for each smartwatch also differs. The Moto 360 uses Corning Gorilla Glass 3 while the Huawei Watch has a Sapphire Crystal glass, which is more resistant to scratch than the former.

But while the Huawei Watch has better specs on paper, you really would not see that much difference when you look at the watches. The difference is not that significant nor is it noticeable on a small screen. Unlike smartphones, you really do not have to look that long on your smartwatch’s screen.

What makes the Huawei Watch really win when it comes to the display is that the screen takes up most of the watch face. It does not have the “flat tire” effect that Moto 360 has, wherein the bottom of the screen look cut off.

Another thing going for the Huawei Watch is that when you put it on the always-on “ambient” mode, the screen stays very crisp and easy to see. When it is always on, the Moto 360‘s display becomes very pixilated and difficult to see.

Specs-wise, the Moto 360 and the Huawei Watch have the same speedy processor, CPU, and graphics card. They both have the same amount of RAM and internal memory and are both able to connect to Android and iOS devices.

As far as sensors go, both feature a heart rate sensor, accelerometer, gyroscope, and vibration sensor. Both smartwatches also have onboard speakers and microphones, and both are water- and dust-resistant. However, the Moto 360 has an ambient light sensor and offers wireless charging, while the Huawei Watch has a barometer on board.

When it comes to charging, the Moto 360 wins. The Huawei Watch can take some work to charge. It comes with a charger that you attach to your smartwatch with pins.

To make sure that the watch is charging, you need to align the pins first before inserting them. The Moto 360, on the other hand, relies on wireless charging. You just put it in the cradle and it will charge by itself. 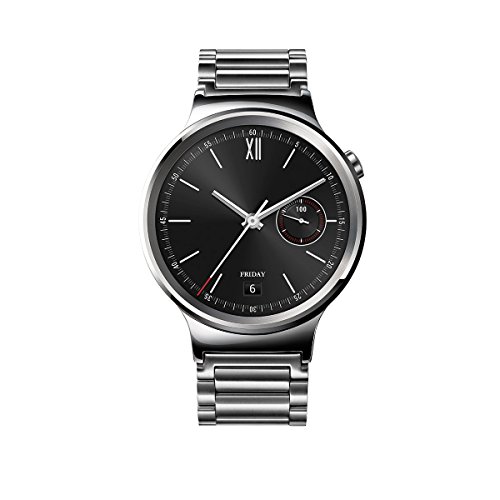 This means that the Moto 360 is generally more affordable than the Huawei Watch. In fact, based on the official suggested prices, you can own a Moto 360 for $50 less than a Huawei Watch.

Even if you compare the same materials, the Moto 360 still comes out cheaper. For instance, on Amazon, the suggested retail price for a silver stainless steel banded Moto 360 is $320 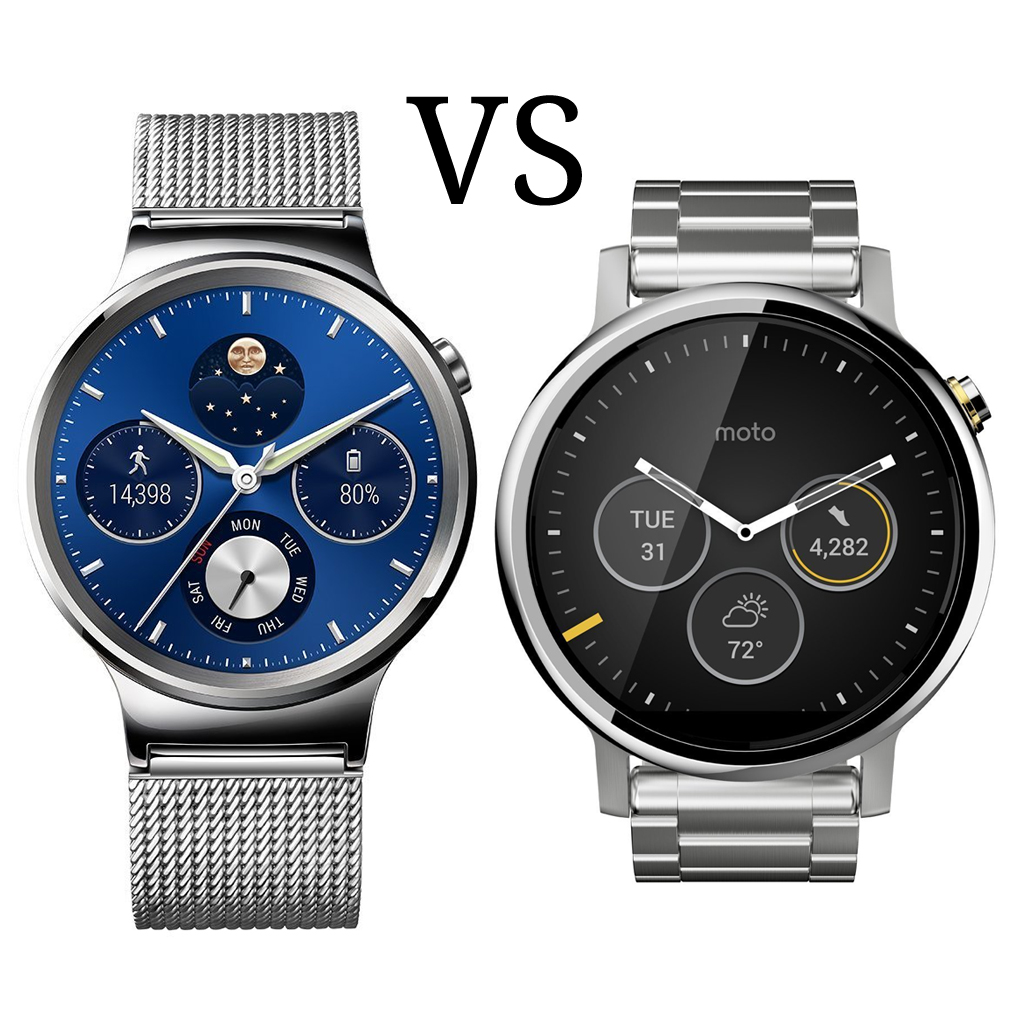 The Moto 360 certainly has its appeal with its ambient light sensor, the flexibility it gives in designing your perfect smartwatch, its better charging setup, and its generally more affordable price tag.

However, all of these do not really make up for its lackluster performance as a smartwatch when it is compared with the Huawei Watch.

Huawei delivers a much better smartwatch experience with the Huawei Watch. They also pulled out all stops when it comes to the materials they used for the device. Not only does it offer a smoother experience, it also has a much more premium feel and look than the Moto 360.