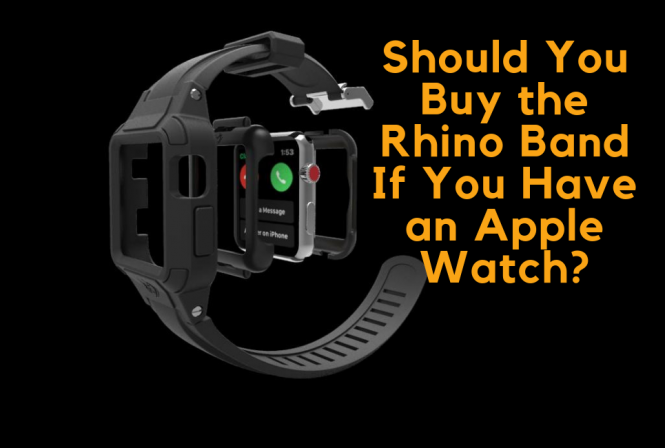 The Apple Watch is probably the first thing that comes to mind when people hear about smartwatches.  Maybe it is because most people already have an iPhone and they know how Apple can come up with great devices. Or they just know that having an Apple Watch is an excellent way to have a second screen.

The good news about the Apple Watch is that it also doubles as a fitness tracker, among other things.  However, you cannot take the Apple Watch with you on rugged adventures, which would have helped you achieve your fitness goals.  The Apple Watch was just not built that way.  This is the reason why the Rhino Band was conceptualized. 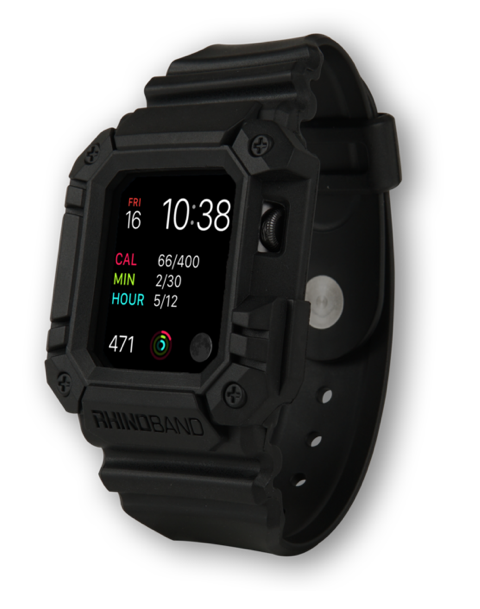 Rhino Band 2 turns your Apple Watch into a sturdy device that can survive the harshest scratches and bumps. Think of the Rhino Band as your smartwatch’s armor.

You only need to pop in your Apple Watch and the Rhino Band 2 will protect it from scrapes, drops, and bumps. The band is made of polyurethane that will keep your watch safe while also taking care of your skin.

The strap is torn- and shock-resistant. It is also very comfortable to wear. You can secure the band in place using the stainless steel buckle. The button style buckle means you can affix the strap on your wrist comfortably and with just one push.

The Rhino Band 2 allows you to go to the gym with your Apple Watch and not worry about it. You can take it on life’s roughest adventures as well. The Rhino Band 2 is available only in black.

It allows you to easily access every part of your Apple Watch, from the digital crown to the buttons, and the touchscreen. You can even use the audio port and charge your smartwatch without needing to take your watch out of the band. The Rhino Band 2 costs $24.99 here. 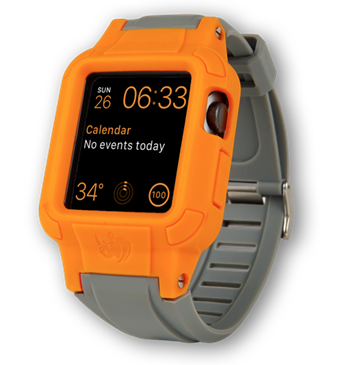 The Rhino Band Stealth Tactical Band aims to give you a sporty yet elegant band for your Apple Watch. You can take this anywhere from the gym to the mountains and even to the skies as you do some hang gliding.

Like the Rhino Band 2, the Stealth Tactical Band will keep your Apple Watch safe from bumps, scrapes and just about everything. But this strap has three layers of protection, ensuring that it would be tougher and can survive more rugged adventures. It even has a military-grade glass that would protect your Apple Watch from even the nastiest scratches.

Trying to figure out how durable the Rhino Runner is? You should know that it is named after a military armored vehicle. The Rhino Runner helps you keep your Apple Watch safe from repetitive scratches and bumps. It has three layers of protection and is made of advanced polyurethane material. 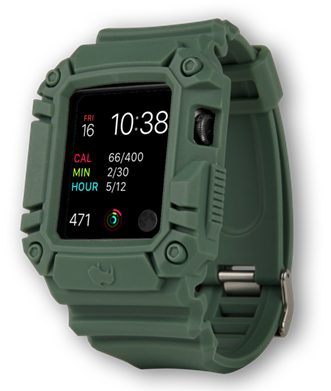 A lot of people love the Apple Watch, but they cannot wear it everywhere because it is not meant for rugged environments. Some people avoid buying the Apple Watch and opt to buy a Suunto smartwatch or a Casio G Shock instead.

Others own the Apple Watch and another smartwatch for their outdoor adventures. With the Rhino Band, they can finally take their Apple Watches to where it matters: the gym or while on a hiking or mountain climbing trip.

Moreover, with a Rhino Band, you do not have to use any tools so you could use it with your Apple Watch. Plus your smartwatch stays in place securely.  The Rhino Band uses the best materials as well such as flexible yet durable plastic and military-grade glass. It is also designed so that the Apple Watch fits in it perfectly.

If you think that the Rhino Band is unique, think again.  It has several competitors that are now available in the market. 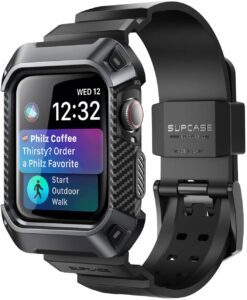 Made for the 42 mm Apple Watch, the SUPCASE Rugged Protective Case protects your smartwatch without blocking any of its buttons, ports, touchscreen, and digital crown. This allows you to access the Apple Watch’s many features and functionality. The SUPCASE has a Unicorn Beetle Pro bumper that protects the smartwatch from bumps and shocks. It also has a raised bezel that helps protect the watch screen from scratches and damage.

The band itself is scratch-resistant so that it looks good even as the years go by. To use the Apple SUPCASE Rugged Protective Case, all you need to do is to pop the Apple Watch in.

The Apple SUPCASE Rugged Protective Case has a rating of 4.5 stars out of 5.0 on Amazon. Most of the reviews are positive, but some critical reviews dissed the band for not being durable.

The Apple SUPCASE Rugged Protective Case is also decidedly masculine; women who would like to protect their Apple Watches would need to look elsewhere.  It sells for less than $20, with prices ranging from $17 to $19. Choose from the following color options: red, black, blue, and gold. 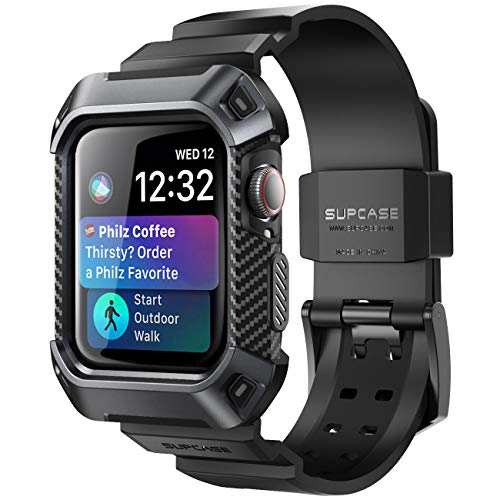 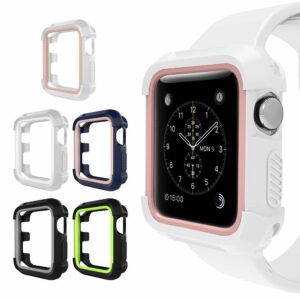 The UMTELE Shock Proof Bumper Cover Scratch Resistant Protective Rugged Case is compatible with an Apple Watch that has a 42 mm strap.

You will love the two layers of protection you get from the hard shell and the TPU band. Like the SUPCASE, this protective Apple Watch case will give you access to all the buttons, the crown, and the ports on your smartwatch and has a raised front bezel that helps protect the screen.

The UMTELE Shock Proof Bumper Cover Scratch Resistant Protective Rugged Case is very lightweight and very slim. On top of the under $10 price, you would also love the 12-month warranty.

As far as ratings go, the UMTELE Shock Proof Bumper Cover Scratch Resistant Protective Rugged Case has a rating of 4.5 stars out of 5.0.

Customers loved its thin profile that adds very little bulk to the Apple Watch. Some negative reviews talked about the case’s lousy fit, specifically with the first series Apple Watches.  This case sells for $6 to $7 and comes in black, blue, and white main body color, with pink, black, gray, red, volt green, and yellow accents. 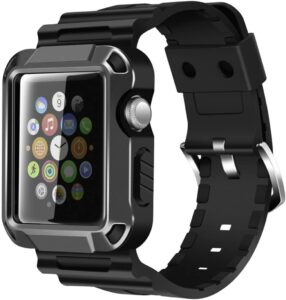 The Iiteeology band is compatible with any 42 mm Apple Watch and has a soft TPU band that comfortably wraps around your wrist. It has 11 holes to help you get a snug fit for your smartwatch and it comes with a built-in screen protector to keep your smartwatch safe from scratches.

The black band comes with a colored bezel. You can choose from a variety of seven colors: gold, black, silver, orange, red, space gray, and rose gold.

The Iiteeology Apple Watch 42mm Band Compatible Rugged Protective iWatch Case and Band Strap with Built-in Screen Protector also cost less than $10 and has a rating of 3.6 stars out of 5.0 on Amazon…

Some of the critical reviews left by people who bought this watch complained of the dust that gets caught between the watch screen and the strap’s protective screen. Plus the fact that the display becomes less responsive because of the protective screen. However, most people praise the brand for its durability, lasting more than a year before finally needing to be thrown away.

The Rhino Band is a must-have if you want to make sure that your Apple Watch is safe from everyday accidents.  As a device that you wear on your wrist, it is quite easy to bang your smartwatch against walls, table corners, or any other hard surfaces.

However, this Apple Watch band can prove to be more expensive than other alternatives in the market.  You can get similar protection from more affordable brands, with some of them costing less than $10.  But still, you will love the durable materials that the Rhino Band uses.

The more expensive price tag could be justified by the band’s military-grade glass and the plastic material that is also easy on your skin.

Should you buy the Rhino Band? Yes, if you find yourself outdoors more often than not. It certainly does an excellent job of keeping your smartwatch safe.

Where to Buy the Rhino Band? Check it out exclusively on the Rhino website here.