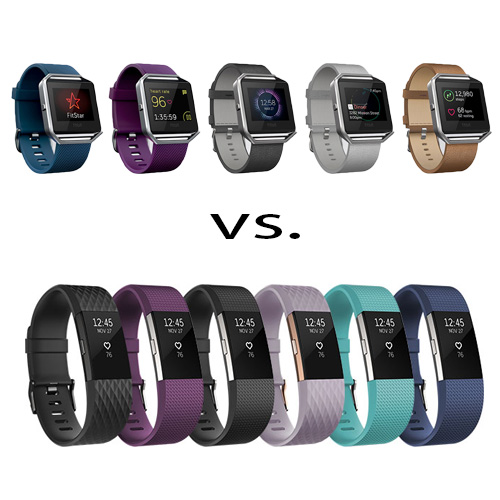 When the Fitbit family came out with the Fitbit Tracker device almost a decade ago, it became a hit among health enthusiasts, Fitbit fitness lovers, and among those who wanted to lose weight.  It was also one of the very few wearable technologies that worked.

Fitbit Tracker made people get off the couch and move, told them about how good their sleep was, and even knew when they were walking or just took the elevator, like a personal Fitbit coach!

Fast forward to 2017, and we now have a market of wearable technology that is overcrowded with devices that count how many steps you have taken and keep track of your fitness.

Fitbit has not slowed down since, coming out with 15 different Fitbit models that helped cement its place in the wearable technology space. Two of these are the Fitbit Charge 2  tracker Fitbit and the Fitbit Blaze, which was first introduced during the Consumer Electronics Show in 2016 in the latest smartwatch section.

But which between these two is the better buy?  Read on and find out!

The Main Differences Between Fitbit Blaze vs Fitbit Charge 2 are:

Fitbit Blaze Smart Fitness Watch wearable device is the company’s first meaningful attempt at creating a smartwatch that is also a fitness tracker.  The design is pretty much like the older watches from the 80s.  Yes, Blaze has a retro look that does not make sense for those looking for a more modern design.  It has a square-ish form with sharp edges and a wider screen than most Fitbit models.

But even with its bulky look, the Fitbit Blaze device is very comfortable to wear, and it is a lot lighter than it looks. Plus, Blaze has five strap colors to choose from: the regular edition has black, blue, and plum – all three with a silver face color.  While the special edition has black/gunmetal and pink/gold combinations.

While Fitbit Blaze looks like a smartwatch with its colored touch screen display, it retains the things you love in earlier Fitbit devices.  It counts steps taken, calories burned, and distance moved, and it tells you how many floors you have climbed, as well as monitoring how deep your sleep is.

The tracker Fitbit device also takes good care of your heart.  For instance, you can get customized Cardio Fitness Scores and tips on how to improve breathing.  You can also get accurate heart rate readings without having to wear chest straps, thanks to the PurePulse Heart Rate feature.  Also, the guided breathing sessions use your real-time heart rate.

There are also additional features such as the on-screen workouts, cardio fitness level, smartphone alerts, and multi-sport tracking.  The Fitbit Blaze has a bigger screen and side buttons, which makes sense because the smart watch can accommodate more health-related data in one screen.  It also gets smart, showing you your SMS messages, incoming phone calls and reminders for your next meeting.

You can even control music playback on your Blaze, which is not possible in all Fitbit models.

On top of mixing some smartwatch elements with all of Fitbit’s features, there are a lot of things you would love about Fitbit Blaze.  For one, it is more comfortable to wear than an Apple Watch.

You can buy extra elastomer bands, or use the alternative steel-link or leather bands (both of which are included in your purchase) if you want to mix and match your Blaze with whatever you are wearing, as well as the event you are going to.

It has a variety of watch faces to choose from, including fitness-related ones.  It also runs for four days on a single charge.

The Fitbit Blaze might have a long-lasting battery life, but it takes some amount of work to recharge them, even with the original charging cable.  You would need to pop the watch face out and put it into a charging cradle.  Also, while the onscreen workouts were included with good intentions, these workout sessions are of no use because you need to wear the watch to time and count your movements.

There is simply no way to watch the onscreen workout and do what it is telling you to do, because you would be moving your arms and hands around.  Further, with the smartwatch features, you won’t find a water resistant capability, you cannot get the Fitbit Blaze wet.  You can sweat or run in the rain, but you have to take it off when you go for a swim or when you take a shower.

And even if the Fitbit Blaze is being positioned as a smart fitness watch, it does lack the features of earlier smart watches from Apple.  But the lack of features in this mobile device is more than compensated with the more budget friendly price tag and its fitness tracking features.

If the Blaze looks more like a smart watch, Fitbit Charge 2 looks more like other earlier Fitbit devices.  The wristband, however, has a more elegant look with its elastomer material and stainless steel tracker and buckle.

When compared to earlier Fitbit wristband-type trackers, the Charge 2 smartwatch features, includes a bigger OLED display that allows you to see more information on one screen.  One lift of your wrist and you can see the time, your heart rate, and steps you have taken without switching to another screen.

If you are interested to learn more, you can press the side button to cycle through the modes and then tap the display for more information.

The Charge 2 can be used to track your exercise and to track your heart rate, and it can be used as a stopwatch, too.  It also offers a relax mode, with its guided breathing sessions.  If all these sound familiar, it is because Charge 2 has many of the same features offered by Blaze.  This side-by-side comparison will help you know the features shared by the Blaze and the Charge 2:

The similarities between Fitbit Blaze and Fitbit Charge 2

The Fitbit Charge 2 and Fitbit Blaze cover the basics quite well.  Both can count the calories you have burned, the number of steps you have taken, and the distance you have travelled.  They can also tell you the time and how deep your sleep is, as well as remind you to start moving or exercising.

Both the Blaze and the Charge 2 know what type of exercise (running, hiking, yoga) you are doing and start to log when you start doing these exercises.  This way, you get more accurate data on your activities.  Both also have the ability to accurately gauge heart rates without having to wear chest straps and both feature the Cardio Fitness Level, which can be an indicator of how healthy your heart is.

Additionally, both models can connect with your smartphone in order to notify you of any incoming calls or text, remind you of your next appointment, or guide your breathing to help you relax.

Where the Fitbit Charge 2 wins

Between the two, Charge 2 has a $50 lower price tag: perfect for the budget- and health-conscious.  Yet, even with the cheaper price, it retains most of the important features that you could find in the Blaze.  Another thing going for Charge 2?  It has more color options.

Where the Fitbit Blaze wins

Fitbit Blaze has Music Control features that allow you to use your Blaze to cycle through your playlist and turn the volume up or down.  The Charge 2 also does not have the On-Screen Workouts, most probably because of its smaller screen size.

In short, the Fitbit Blaze offers some additional features that are nice to have, but is not enough for you to completely dismiss a fitness tracker that do not offer these features, like the Charge 2.

What to buy: Fitbit Blaze or Fitbit Charge 2? 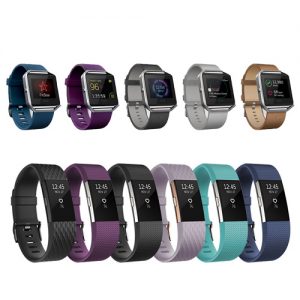 Looking for a fitness tracker?  Fitbit still delivers with devices that perform really well in logging your activity.  It also comes with a great app that makes everything visual and easy to understand, while making your fitness journey more social.

Other fitness trackers may also have a well-made app but Fitbit has more following on social media, and that alone is a good talking point when it comes to choosing a fitness tracker.

Between the Fitbit Charge 2 and the Fitbit Blaze, you are choosing between two superior devices that do their jobs well.  If you are looking for a fitness tracker that looks like a smartwatch, get the Blaze.

However, if you are looking for something that you can swim with, then both the Fitbit Charge 2 and Fitbit Blaze Smart Fitness Watch are out of the question.  Get the Garmin Forerunner 920xt or the Garmin vívoactive Or if you want to stay with Fitbit, there is the Fitbit Flex 2, which is water-resistant up to 50 meters.