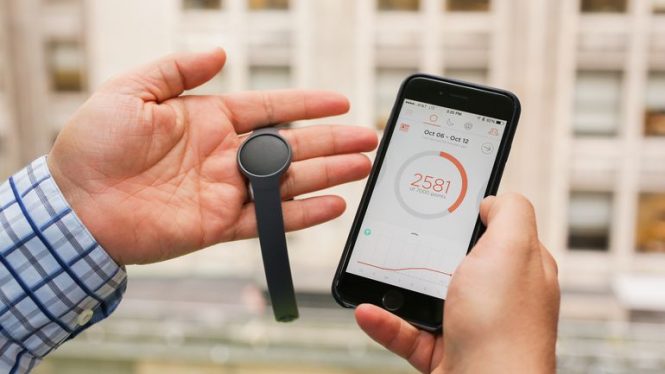 Think about fitness trackers and then think about counting steps, calories burned and distance traveled. The next thing you would think about is the price, because fitness trackers, especially Fitbits, have this reputation for being too pricey – something in the range of at least $100.

Misfit changed all that when they first offered the Shine and, subsequently, the Flash, both of which are capable fitness trackers but with very low prices. How does one compare to the other?

The main differences between Misfit Shine vs Misfit Flash are:

Misfit Shine first came out in 2013, and it certainly turned the world of fitness trackers upside-down. Here is a fitness tracker that did not cost a lot of money. It looked like an alien pod that used aircraft-grade aluminum.

It tracks the number of steps you take, the distance you traveled, and how deep your sleep is. Misfit Shine also shines in the way it looks.

The Misfit Shine now sells for $19.99 at the company’s online store. It comes in different colors, including gray, jet black, Coca-Cola red, topaz, champagne, storm, coral, wine, and sea glass. The tracker can be worn on your wrist, or clipped on to your clothes. You can also buy the $30 Misfit Bloom necklace and use the Shine as a pendant. With the Shine, you have a well-crafted and elegant-looking fitness tracker.

Misfit Shine counts your steps and tracks your movement with the three-axis accelerometer within the tracker itself. It synchronizes your data with your mobile phone via Bluetooth. You can take it swimming and you do not have to take it off in the shower because it is waterproof up to 5 atm. With the Misfit Shine, you can track certain activities such as running, walking, biking, sleeping or swimming.

The Misfit Shine has 12 LED lights on its face. The tracker tells you about your daily progress by the number of lights on. For instance, if you were already halfway there, there would be six lights on. Misfit Shine also doubles as a clock. It will light up one of these lights to indicate the hour, while another light would blink, indicating the minutes. If you need to know the time, all you have to do is to double tap the Shine’s face.

The Misfit Shine is a great-looking activity tracker that gives you an insight into your activity and sleep. Rather than a display, it makes use of the 12 LED lights to show you your progress. Its minimalist yet futuristic design is a conversation starter, and you can swap out the included wristband with a variety of leather wristbands or get the Bloom to wear it as a necklace.

Furthermore, it runs on replaceable batteries so that you do not have to worry about charging it. One battery lasts for six months. Also, uploading the data to your smartphone is rather simple. All you have to do is to touch the Shine to your smartphone’s touchscreen and it would start to sync.

The Shine does not have its own display. In order to see your numbers, you would need to check the mobile app. Also, the Shine is rather small, which makes it perfect to use as a wearable yet easy to lose.

And while it may use Bluetooth to transfer data, the range needed to reliably transfer your data is rather limited. In fact, you will need to make sure that the Shine and your phone are very close to each other, if not directly in contact. You also have to buy a CR 2023 battery every six months, an expense that would add around $10 a year.

Because of its eye-catching design, it is better to think about the Misfit Shine as a piece of jewelry that can track your activities than as a fitness tracker that looks good. This is not to say that it does not hold its own against other fitness trackers. In fact, it does pretty much the same things that earlier Fitbits did. Right now, it is $40 cheaper than the Fitbit Zip, but with more features. For instance, you cannot take the clip-based Zip swimming, nor can you wear it around your wrist or wear it as a pendant.

Misfit Shine is a great device for people who are looking for an affordable way to count their steps, to know how much they have moved, and to see how deep their sleep is. It is not really for the serious athlete because it does not have continuous heart tracking and other nifty activity-related features that other trackers can offer. Also, women who are looking for a tracker that they can wear as jewelry might find the Misfit Shine a great buy. For less than $20, you cannot go wrong with the Misfit Shine.

The Misfit Wearables Flash is the second product that the company introduced. At launch, it was a lot cheaper than Misfit Shine. It currently sells for only $10.

The Flash uses polycarbonate and TPU plastic instead of the aluminum you see on the Shine. It is currently available in four colors: onyx, frost, wave, and fuchsia. It may be made of a different material, but the Flash has the same capabilities as the Shine. It keeps track of the number of steps you take, the number of calories you burn, and the quality of your sleep. It also uses a replaceable CR 2032 battery that lasts for up to six months and it can pair with your smartphone to sync your fitness data with the mobile app.

If you have always wanted to get a fitness tracker but always find yourself hesitating because you do not want to shell out a lot of money for one, you will definitely love the Misfit Wearables Flash and how affordable it is.

Also, if you are the type of person who easily loses stuff, then you would love the Flash because it pops into the housing from underneath. It does not pop out as easily as the Misfit Shine, where the strap holds the tracker by locking into the groove at the center of the tracker’s body. What’s more, the Flash’s TPU and polycarbonate material is less-resistant to scratches.

What could have been better

In order to offer a comparable fitness tracker at a significantly lower price, Misfit had to scrap the aluminum material and make way for the plastic body you see on the Flash. While this does not necessarily mean that the Flash is ugly to look at, it does give the wearable a cheap kind of feel. This is especially true if you place it side by side with the Shine.

What’s the difference between the Misfit Flash and Misfit Shine?

To make it easier for you to see the differences between the Misfit Shine and the Misfit Flash, here is a side-by-side comparison of the two:

FAQ’s About Misfit Shine vs. Flash

Unfortunately no, however, they only sell the straps so you can replace on your old watch. The company released a few other collections of smartwatches including the Vapor, Vapor 2 and Vapor X which come in plenty of colors and different straps (silicone, sport, and steel straps).

Like the Misfit Shine, the Misfit Flash is also not being sold in 2020 anymore because as it appears the company is creating new models every year that offer better features and are up to the competitor’s standards.

Can I still find Misfit Shine or Misfit Flash?

Even though the Misfit Shing and Flash are not sold on the official site, you can still find these two on Amazon if you are lucky enough.

With both the Shine and the Flash, Misfit shows that fitness trackers do not really have to be very expensive in order to give you insights on how you sleep and move. While neither one can monitor your heart rate, both of them can do a pretty fine job of counting your steps, measuring sleep quality, and keeping track of the distance you have traveled.

For people who are trying to figure out if wearing a fitness tracker could help them or those who just want to know how many steps they are taking every day, then either Shine or Flash would be a good fit.

Choosing between the Shine and the Flash would depend on your personal taste. If you like the idea of having a piece of smart and connected jewelry that also acts as a fitness tracker, then go for the Shine. But if you like a sportier look and the ability to control smart devices around your home, as well as operate your smartphone without touching it, then go for the Flash.