So, you are trying to decide between two popular Android smartwatches, but don’t know which is better? I’ve been there. The Samsung Gear S and Moto 360 are two classy options in a crowded market. If you’ve narrowed your choices down to these two, this article will help you make an informed decision.

First, a bit about both watches individually… 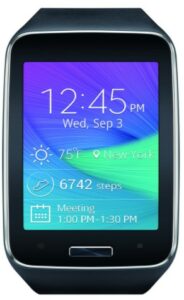 The Samsung Gear S offers more than the average smartwatch. Like other smartwatches, you can send texts and emails, receive notifications and take calls from your wrists. Unlike many smartwatches, it is fully functional without your cell phone so you can leave your phone at home and still browse the web and receive calls.

It is not entirely independent of a cell phone though, you need to have a Samsung Galaxy® smartphone (running Android 4.3 or higher) to set it up and to download or update apps and you will need a cellular plan, even if you only plan to use it as a companion device.

It has a sleek and sporty design that includes a wide range of features and functions. The screen is large and high quality so you can read it easily in any light. It is as durable as other smartwatches and you can purchase colorful bands and download a variety of watch faces to customize the look it.

Joggers will appreciate the functionality of the heart rate monitor. And it has speakers and a microphone so you can talk on the phone without a blue tooth headset if a call comes in when you are away from your phone. 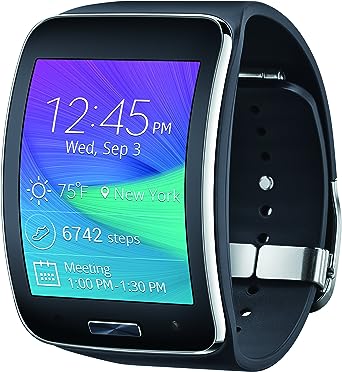 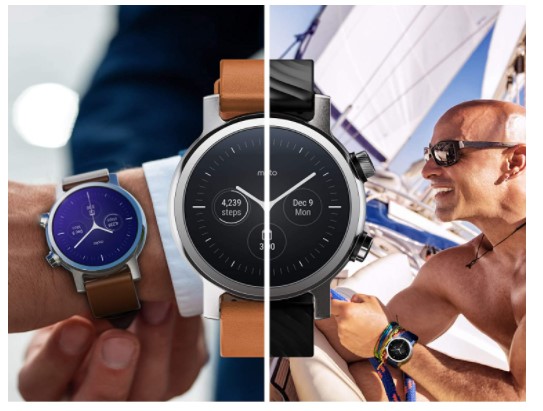 The Moto 360 is a capable smartphone that has the look and appeal of a classic round-faced watch. It comes in a variety of case finishes and has a variety of leather and metal strap options.

You can choose a classic look with a simple light metal face and leather wrist band, an old military look with a dark metal face and black band, or give it a high-end look with a champagne gold case and band. The face is large though, so it will look like a large watch even on beefier wrists.

Like most smart watches, the Moto 360 acts as a mirror to your cell phone. It is compatible with Smartphones running Android 4.3 or higher but it does not work independently of the phone as the Samsung Gear S does.

You will need your phone to be nearby for the watch to function but it will save you from digging in your bag to get to your phone just to read a text or see who is calling. Overall, it is a good choice if you are looking for a smart phone but want something that doesn’t look like a high-tech gadget or a sports watch.

When it comes to wearable tech, fashion is important and these two watches offer totally different looks. The Samsung Gear S has a sleek, high-tech design with an overall look that is sporty, whereas the Moto 360 has more classic styling.

The Gear S has a curved screen that wraps over the top of your wrist. It looks more like a small, bent smartphone than any kind of watch. The band is a flexible rubber that wraps around the face. Samsung offers two choices of bands for it, regular and bangle style.

You can purchase both bands in multiple colors but they are made of similar material and all look strongly techy so if you are looking for something that looks more like jewelry, don’t bother with the bangle style, even the crystal-encrusted Swarovski edition band looks more like a pimped-out sports watch than jewelry.

The Moto 360 doesn’t look like a sports watch at all. It has a classic design that looks just like a traditional round-faced watch even down to the band style and the small knob on the side. The case comes in three finishes: light stainless, dark stainless, or champagne gold and you can choose from a light-colored face or dark-colored face.

You can also choose from three colors of leather bands, a stainless 24-millimeter mono link band, a light, dark or gold 23-millimeter band, or a light or dark metal 18-millimeter band.

Comfort counts whether you are wearing your watch at the gym or the office. Both watches are large and heavy. The Moto 360 with a leather band is the lightest of these two models coming in at 49 grams, but the metal band version is much heavier than the Gear S.

The Gear S weighs 66 grams (2.3 ounces) which is significantly heavier its leather banded competitor, but much lighter than a metal band Moto 360. Both watches have large faces and dominate even large wrists, but the Moto 360 has a much smaller look overall.

The band is much thinner than the watch face, whereas the Gear S-band is as wide as the face and the face is much shorter. In profile, the Moto seems thicker than the Samsung but both are

Both watches have quality displays, but the Samsung has slightly more pixels per inch and is slightly larger than the Moto display.

The Moto display, however, reaches all the way to the edge of the face (except for a tiny black slice at the bottom) whereas the Samsung display is a rectangular box with a black frame around the margins. Much like a tablet or smartphone, you navigate both watches by simply tapping the icons on the screen.

Both models are rated IP67 so they are dust tight and water resistant. They can weather a brief rain storm or an accidental dunk in the sink, but you can’t wear them while swimming or in the shower.

Both faces are scratch resistant and will tolerate a few light scrapes but will shatter under impact or scratch heavily . The band style of the Samsung does seem to offer a bit more protection around the edges whereas the Moto face edge is upraised and seems more vulnerable.

Both watches have an ever-expanding list of available apps but they have access to fewer apps than many of their competitors.

The Samsung watch runs on Samsung’s limited Tizen operating system, so even though it is compatible with Android phones, it does not have access to all of the apps available to Google’s Android Wear. The Moto’s limitation comes from the round screen. Some apps just don’t work well on the round display.

Both watches have comparable lithium-ion polymer batteries with similar battery life so can go an entire day without charging with either watch under light use. All smart watches use more battery power when connected to GPS, WiFi or Bluetooth so you may need to charge your watch more frequently under heavy use.

Unlike a traditional digital watch, you can’t change the battery yourself but you can have the battery replaced for either of them if needed. The Samsung Gear S comes with an extra battery pack that you can use if your battery runs down while you are out and about.

The Moto 360 has a convenient QI wireless charging system. You can set it into the charger or place it on any QI charging pad to charge it.

Final Recommendation: Would I Choose the Gear S or Moto 360?

If I was forced to make a decision today…

The Samsung line of watches is built for their smartphones and tablets. If you are a Samsung owner, the benefits of integrating the Gear S definitely pay-off.

You can actually the Gear S with a qualifying AT&T plan for just $50 here. Still, there is no real reason to buy the Gear S if you don’t already have a Samsung device.

As an entry-level smartwatch, I’d lean towards the Moto 360 because it’s less of an upfront investment at less than $150. The Moto 360 is also more customizable and compatible across all Android platforms.

So, as a general recommendation, I’d go for the Moto 360. If you are looking for other Android-compatible smartwatches, check out this buying guide.