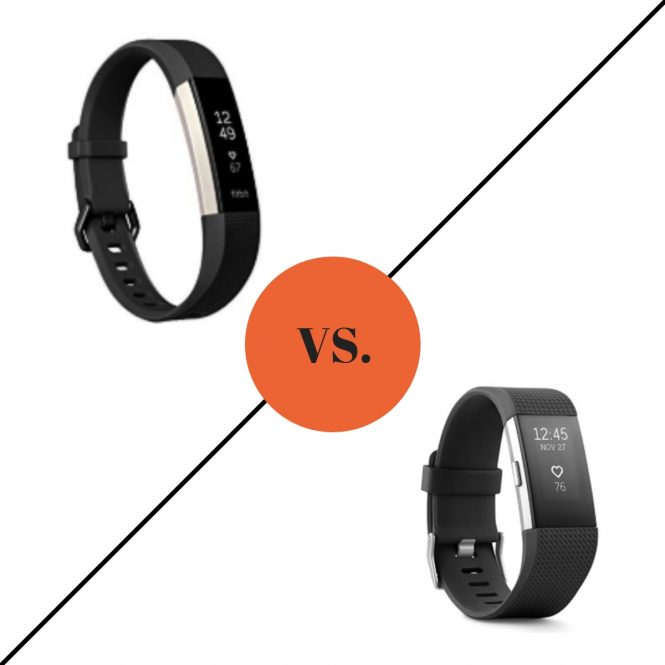 Fitbit has been known to come up with excellent activity trackers that allow you to gather data and get better insights into your health. Two of its best trackers are the Fitbit Alta HR and the Fitbit Charge 2. How does one compare with the other?

The Fitbit Alta HR came out in March 2017.  This model improved on the features and design of the Fitbit Alta.  Notably, it added a heart rate monitor to the Alta and threw out its two-pin clasp in favor of a buckle.

The bands are made of elastomer, while the tracker itself is encased in stainless steel. However, you can swap out the straps if you want to change up your Alta HR’s looks. There are metal and leather bands available for your Alta HR. The Fitbit Alta HR comes with a small OLED display. The bi-colored screen allows you to see your statistics quickly, with easy to read tracking information right on your wrist.

The screen lets you know your current counts even when you do not take out your smartphone. Overall, the Fitbit Alta HR is very comfortable to wear all day. Some design elements make it hassle-free to wear. There’s a slight curve on the tracker that makes it conform to the shape of your wrist. It is also effortless to secure the Fitbit Alta HR on your wrist using the buckle mechanism.

Features and specifications of the Fitbit Alta HR

More than just the looks, it is what is inside that makes the Alta HR stand out. The Fitbit Alta HR has an OLED screen that helps you see your statistics even when you are under the direct glare of the sun. It also has an accelerometer and heart rate monitor, which allows the Alta HR to do what it is supposed to do. The device also has a vibration motor that lets you know when you receive the call or text notifications.

The vibration motor also gives you feedback when you have achieved your fitness goals. Then you have the battery. The Fitbit Alta HR uses a battery that lasts more than a week without needing to be recharged. The Alta HR is a Fitbit device through and through, and it gives you accurate sleep and activity tracking.

What’s more, because of the heart rate monitor, you can also get information on your sleep stages. You can finally discover your sleep patterns, such as how long you spent in deep, light, or REM sleep. It also has the SmartTrack feature, which will automatically log your exercises and sleep duration.

However, the most significant feature of the Fitbit Alta HR is its companion app. The Alta HR uses the same app as other Fitbit devices, and it offers you a lot of insights into your fitness. It also allows you to easily set your daily sleep, activity, and water intake goals, among many others.

The app also has the Sleep Schedule feature that gives you a more in-depth look into your sleeping patterns. Another feature you might like is that the mobile app will compare you with other Fitbit users. This feature will help you know how you stack up, which can help motivate you to do more if you are slacking off with your fitness goals.

Further, the mobile app will enable you to set up your Fitbit Alta HR, including telling it which wrist you are going to wear your activity tracker. What’s more, the mobile app will also connect you to other fitness apps. This feature allows you to use the app that you are most familiar with.

The Fitbit Alta HR app is also compatible with a range of devices such as Windows Phone, iOS, and Android. You even have a separate mobile app for Mac users.

What you will like about the Fitbit Alta HR

Apart from the long lasting battery and the good looks, the Fitbit Alta HR delivers on its promised features. It can track your fitness well enough. What’s more, it is very comfortable that you can even forget that you are wearing it.

What can be better

There is not much-added functionality to the Fitbit Alta HR. It tracks your steps, sleep, and calories burned, and it tells you when you receive a call or text. But that’s the extent of what it can do. What’s more, the OLED screen might be easy to see, but it is not always responsive.

Further, the Fitbit Alta HR does not have GPS functionality. Another thing that the Alta HR lacks is waterproofing. If you go swimming, then you should take the Alta HR off, unless you want a waterlogged and bricked fitness tracker.

Ratings and reviews for the Fitbit Alta HR

With around 4,200 reviewers, the Fitbit Alta HR currently has an average rating of 3.9 stars out of 5.0 on Amazon. Verified buyers like the reminders to move and the continuous heart rate monitoring that the Alta HR gives them. They also praise the notifications they get from their phones. There are also reviewers who mention the mobile app, which helps to extend the functionality of the Fitbit Alta HR and makes their fitness data more accessible and easier to understand.

However, this is not a perfect device, and there are complaints about the company’s customer service. There are others who cast doubts on the Alta HR’s accuracy. Meanwhile, others complain that their Fitbit Alta HR is no longer usable after only a short period of use because of various issues such as broken parts or the battery not charging.

Pricing for the Fitbit Alta HR

The Charge 2 is yet another fitness tracker from Fitbit. However, the Fitbit Charge 2 has several new features that you might like. How does it differ from the Fitbit Alta HR?

The Fitbit Charge 2 is larger than the Fitbit Alta HR, and this is very obvious when you have them side by side. It has a black and white screen that contrasts nicely with the color bands. The display is also OLED, so it is very easy to see. The Fitbit Charge 2 also features interchangeable straps.

Both the Fitbit Charge 2 and the Alta HR tracks the same fitness metrics, such as calories burned, distance traveled, steps, and sleep duration. The Charge 2 also has a heart rate monitor on board so it can also tell you about your pulse rate and sleep stages.

The Fitbit Charge 2 has shorter battery life than the Alta HR. The device only gives you only five days of juice vs. the seven days that the Alta HR offers.

The Alta HR does not have GPS-related features, which means your tracking data will not have location information. Meanwhile, the Fitbit Charge 2 uses connected GPS. Once paired with your smartphone, the Charge 2 can pull location data using your phone’s GPS.

The Fitbit Charge 2 uses the heart rate monitor to know whether you are stressed or not. It will then take you through breathing exercises that can help you relax and get rid of your stress.

Like the Alta HR, the Fitbit Charge 2 uses the Fitbit app, so expect to get better insights about your health as well. Both of these devices also functions as a stopwatch, timer, and alarm clock. You can even set goals and get reminders, as well.

When it comes to notifications, you can get alerts for incoming calls, calendar items, and text messages. However, because the Fitbit Charge 2has a larger screen, reading these notifications is much easier on this device. Both of these devices are not waterproof. It is safe from water splashes and sweat, but you cannot take the Fitbit Charge 2 swimming as well.

Ratings and reviews for the Fitbit Charge 2

With more than 17,700 reviewers, the Fitbit Charge 2 gets a rating of 4.0 out of 5.0 stars on Amazon. Customers like the build quality on this device, comparing it to the feel you get from an Apple device. Others like the swappable bands and the variety of straps you can get. They also praise the heart rate monitor on the Charge 2.

Some reviewers mention the clip style charger that fits nicely into the device as a plus for this device. However, there are complaints that the vibration motor is very weak on the Charge 2, and you might miss some of the alerts that come it. Others also do not like it that unlike the Fitbit Blaze, you do not get to see the entire text message that you receive.

Pricing for the Fitbit Charge 2

How does Fitbit Charge 2 Compare to others

The Fitbit Alta HR vs. the Fitbit Charge 2: Which should you buy?

When it comes to design, choosing between the Alta HR and Charge 2 is a matter of taste. The Alta HR looks better because of its slim profile. It will be easier to hide away the Alta HR if you want to wear it to dressier occasions. However, the Charge 2 will also look great on those with bigger wrists. The Alta HR might look better than the Charge 2, but the latter gives you more options for interacting with the device.

The Fitbit Charge 2 includes a side button that you can press, as well as allow you to swipe and tap on the touch display to scroll through menus and see your statistics. These mechanisms will help those who do not like the resistive touchscreen on these Fitbit devices.

Rather than pressing extra hard on the screen, you can just use the side button or swipe with the Charge 2. With the Alta HR, you are pretty much forced to tap, sometimes repeatedly to work that menu.

The Fitbit Charge 2 also has connected GPS, which adds location data to your fitness tracking. However, apart from these differences, these activity trackers are very similar to each other, as you can see on this side-by-side comparison:

There has been a lot of tracking devices from Fitbit that has been introduced after the launch of both the Alta HR and the Charge 2. Be sure to check these out first before you finally decide. You might like the features of the Fitbit Charge 3. Or maybe you might be converted from an activity tracker enthusiast to a smartwatch fan with the Fitbit Ionic or Versa.

The Fitbit Charge 3: Our First Look

iFit Vue vs Fitbit Charge 2: Which Should You Choose?